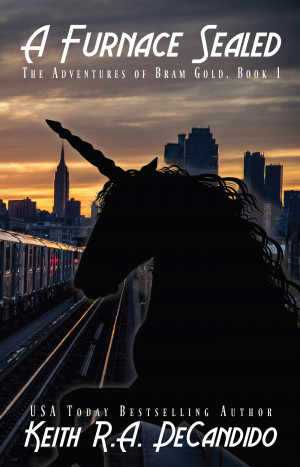 By Keith R.A. DeCandido
First in a new series starring Bram Gold, a Bronx, New York-based hunter-for-hire who wrangles unicorns, guards werewolves, stops binding spells, and generally deals with supernatural happenings and things that go booga-booga in the night. When immortals turn up dead, and binding spells come unraveled, Bram must learn the source before it leads to the destruction of New York City! More
Bram Gold is a Courser, a hunter-for-hire who deals with supernatural creatures, mystical happenings, and things that go booga-booga in the night. Under the supervision of the Wardein—his childhood friend Miriam Zerelli, who is in charge of all magical activity in the Bronx, New York—he's who you hire if you need a crazed unicorn wrangled, some werewolves guarded while they gallivant around under the full moon, or an ill-advised attempt to bind a god stopped.

The Bronx is the home to several immortals, who are notoriously hard to kill—so it comes as rather a surprise when one of them turns up murdered, seemingly by a vampire. In addition, binding spells all across town are either coming undone, failing to work, or are difficult to restore. As Bram investigates, more immortals turn up dead, and a strange woman keeps appearing long enough to give cryptic advice and then disappear. Soon, he uncovers a nasty sequence of events that could lead to the destruction of New York!

Keith R.A. DeCandido was born in what is now the Wakefield campus of Montefiore Hospital in the Bronx. He attended Cardinal Spellman High School and Fordham University, both also in the Bronx, and has lived in the Boogie-Down for forty of his fifty years. In 2009 and 2010, he worked for the U.S. Census Bureau, involved in dozens of different operations throughout the Bronx. So writing an urban fantasy series taking place in the northernmost of the five boroughs is a particular thrill.

He introduced Bram Gold in the short story "Under the King's Bridge" in the 2011 anthology Liar Liar, and he's currently working on the sequel to A Furnace Sealed. His other work includes the "Precinct" series of fantasy police procedurals, published by eSpec Books, the latest of which is Mermaid Precinct, with two more novels and a short story collection forthcoming; a cycle of urban fantasy stories set in Key West, Florida; a series of short stories starring Shirley Holmes & Jack Watson in modern-day New York; and the Super City Cops stories about police officers in a city filled with superheroes. He's also got an extensive resumé of media tie-in fiction, having written novels, short fiction, and comic books in more than thirty licensed universes, from Alien to Zorro, the latest of which includes the Alien novel Isolation and several stories based on the game Summoner's War. In 2009, he was given a Lifetime Achievement Award from the International Association of Media Tie-in Writers, which means he never needs to achieve anything ever again.

When he's not writing, Keith is an editor (for clients both personal and corporate), a martial artist (he achieved his third-degree black belt in karate in 2017, and he regularly teaches karate to kids), an avid New York Yankees fan, and probably some other stuff he can't remember due to the lack of sleep. Find out less at his inadequate web site at www.DeCandido.net.

Reviews of A Furnace Sealed by Keith R.A. DeCandido

You have subscribed to alerts for Keith R.A. DeCandido.

You have been added to Keith R.A. DeCandido's favorite list.

You can also sign-up to receive email notifications whenever Keith R.A. DeCandido releases a new book.