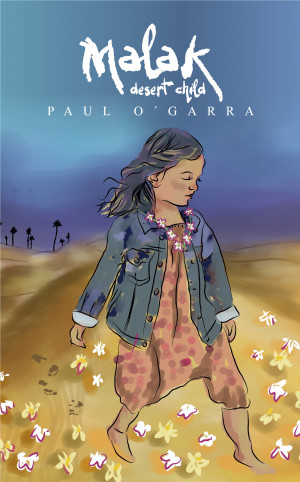 By Paul O´Garra
Rated 5.00/5 based on 2 reviews
A five year old girl living in poverty defends her family against a drunken and scheming father.
Set in North Africa, Malak escapes to the Saharan birthplace of her mother, guided by a mysterious ex soldier.
The feisty child has an effect on powerful people and becomes a mystically motivated catalyst in events that will have earthmoving consequences for the mysterious desert and its peoples. More
The first time I saw her she melted the ice in my soul.
Malak is a tiny beautiful five year old girl child. She lives in a cave in dire poverty with her drunkard father her Saharoui mother and sister. Her enemies are all the town children who victimize her and her sister because of their race and condition. Her only friend is a single mother named Latifa and Malak´s grandmother Jeeda Hazzah who dies of cancer. But Malak is the champion of her family against a violent father and the children of the Zoco who she fights singlehandedly. This is a magical and often mystical story of a young girl and the people she stumbles upon as she is rushed away by her uncertain destiny to the land in which her mother was born, the Sahara Desert. The unravelling of Malak's story is also the unsnarling of the web of intrigue surrounding the North of Africa, and it´s peoples and history, and the reasons for many current dilemmas in this land of witchcraft and mystery. The tale begins in earnest when a wandering ex warrior happens on the child and is struck by her magnificent courage and beauty. After a major episode with a drunken father and his cronies, having interceded on the family´s behalf, he flees with them on a stolen high speed cruiser heading for Western Sahara and freedom.
In the course of their errant journey, they are taken into threatening custody by the Algerian police. The day is saved by the intervention of an old friend of the warrior´s. The friend, a powerful Algerian Warlord, falls under the spell of the feisty child and seems to want to help them although Malak and her mother see in him a very enigmatic and untrustworthy character. Malak´s personality and mystic nature make of her the flux in an adventure which begins as a race to return her to her maternal grandfather´s family. Things begin to escalate as her father reports her family as kidnapped and his country uses it as an excuse to intervene militarily.
What begins as a flight of mercy will become a fight against time as Malak and her friends take on the impossible to try and avoid a military invasion of the whole region by the allied forces of half of the civilised world. In this, they enlist the help of hundreds of thousands of tribes people. Some tribes known to all and others lost in the wastes of the mysterious desert and the annals of history.
The story comes to an emotional and pent up conclusion in the only way that it possibly could.
Available ebook formats: epub mobi pdf lrf pdb txt html
First 15% Sample: epub mobi (Kindle) lrf more Online Reader
pdb
Price: $4.99 USD
Buy Add to Library Give as a Gift
How gifting works
Create Widget
Tags: algeria morocco islam desert sufi tangiers sahara domesticviolence flowers for peace poilisario
About Paul O´Garra

Very nice read from the beginning to the end. Characters are very easy to get attached to. The story is great and very relevent for today. It's well written and makes you feel like a part of the story.

Happy I read it and would suggest others to do the same!:)

I really enjoyed reading this book. I have been an avid reader over many years now and have come to the point where I sometimes worry about what to expect when I pick up a new book. Is it going to disappoint? Am I wasting my time on it? But this felt so fresh and original. None of the usual old tropes that we have tread a hundred times over. It took me to a whole new place. It alternately had me on the edge of my seat to entrancing me with beautifully descriptive passages in exotic lands. All the major characters in the book are beautifully realised and draw you into their separate and and now intertwined worlds. There is a common thread that runs through them all. A search for purpose and a questioning of existence. And a certain nobleness they each possess and carry with them. There is a deeper thread underlying the story-line that transcends throughout the book and it is ultimately a positive and uplifting one. Malak is a very humane book. It keeps you reading and compels you forward and it never lags or tires. I look forward to reading more from this author. A breath of clear air in our troubled times.

You have subscribed to alerts for Paul O&acute;Garra.

You have been added to Paul O&acute;Garra's favorite list.

You can also sign-up to receive email notifications whenever Paul O&acute;Garra releases a new book.