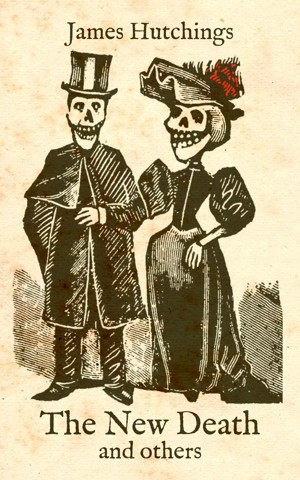 The New Death and Others

James Hutchings lives in Melbourne, Australia. His work has appeared in Daily Science Fiction, Enchanted Conversation and fiction365 among other markets. 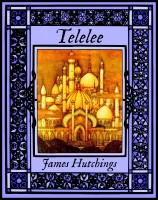 Reviews of The New Death and Others by James Hutchings

I have to admit this book got me from the cover: while I am not sure if the couple is Jose Guadalupe Posada’s work, they are certainly reminiscent of it. As I read, I realized the cover was just perfect, with a combination of satire and irony that makes you laugh, think, and just sit back and enjoy. This book also makes me wonder why short stories are such an unappreciated genre.

James Hutchings is definitely a wordsmith, in every sense of the word. The combination of poems and short stories in this book are like little jewels, and they are arranged nicely, switching from one genre to the other with no room for boredom. Most of the stories are quirky, some are funny, others moral, but they will all make you think. The quality did sometimes jump around a little, but overall I felt it ranged from average to excellent. Many of the endings were unexpected – and it is not easy to surprise me. I also really liked being able to read just a few pages, reach a conclusion, and go to sleep…just to continue reading the next day.

Overall, I really enjoyed this book.

(reviewed 6 months after purchase)
pamela chismar reviewed on May 13, 2012

I appreciated the attempt at witticism and teaching of life lessons that many of the stories in this book had. Although some stories fell flat (such as Uncharted Isle, Compatibility, & The New God), many others were enjoyable (such as The Prince of Howling Forest & Under The Pyramids)
I thought most of the poems were great. I (being a cat lover myself) loved My Cat Is Not Like Other Cats. I may frame it and put on wall in room were my cat sleeps and eats.
As with Aesop, the stories have a moral to them that I think hit home and should really be heard and followed by todays society.
I enjoyed the play with words in some cases. The gangsta tailors creased coats/ vest coats war for example. Singles Bar will probably cause me to never eat at McD's again.
The new twists on Rapunzel and Rumplestilskin were cute.
All in all, while not the best book ever written, it was entertaining. I recommend The New Death and Others if your looking for a fun read.

(reviewed 5 months after purchase)
Sloane Ewing reviewed on May 4, 2012

I just could not stick to it. Well written and clever but didn't grab or hold my attention, overall the technique is there but its not something to "get lost" in.

Some parts of this I found quite funny and laughed aloud. Sly digs and satire. But others didn't work so well for me - the entirely myth stories that had no sly digs were bland. It was unfortunate that the first three stories were of this sort - I probably would have stopped reading if it wasn't for reviewing it. But it did make me laugh and was good for dipping in and out of.

Really, Really entertaining. I think my favorite story is “The End”, but I honestly cannot think of any I didn’t enjoy. He inserts his God Commerce a bit much IMOP, but I think his mythic city of Telelee could stand beside the other great cities inspired by Lovecraftian Mythos.

I alos received a copy for free for review. I will happily pay for the sequel.

I was given an advance copy of this book, but I must say, I would have been more than willing to pay for it. I'll give you the bottom line first, in case you're the type to only read the first couple sentences of a review:

Some of the stories are better than others. A few are a bit derivative and many are very topical (*almost* to the point of being preachy), but for the most part, they were a lot of fun. Mr. Hutchings is quite fond of puns and inside-type jokes, which can be old if you don't like play on words (which I do) or are not familiar with what he is referencing (which, luckily, I was). He spins many idioms on their heads and I think what I enjoyed most was his strong use of voice and language. I was surprised by the number of poems in the work as I do not see many people who do both prose and poetry these days. I particularly enjoyed the poems based on works by HP Lovecraft, Clark Ashton Smith and Robert Howard (so if nothing else, at least I know that Mr. Hutchings and I would have similar tastes). I think the author provided a good mix of humor and tragedy (frequently in the same story), and all together, this is a collection of both heavy thoughts and light ditties. My absolute favorite story was 'The Adventure of the Murdered Philanthropist,' which was not only puntastic but the kind of story I'd love to see made into a little animated short. Some of the ideas and topics are repeated, such as love (or the frustrated search thererof), fame, the poor, the misuse of power, and theology, but while these are clearly things the author considers frequently, it never reached the 'beat the dead horse' level. I can't say this collection is for everyone, but as independent titles go, I must say this has been one of my favorites.

“New Death and the others” is collection of 44 short stories and 19 poems. The stories are fictional with different topics which vitiated from modern to mythical and folkloric.
I think that all stories contain hidden message or they symbolize something. All that stories have unhidden sarcasm.
Some of the stories are funny and make me laugh like ”A Date with Destiny” it is about one man who has date with Destiny through meetallelgoricfigures.com (interesting name for site and also symbolic),but Ambition was to smart and used the pictures from Destiny and presented herself like Destiny.
Some of the stories made me think deeply and I’d agree with the point of the author, like “The God of the Poor” it’s about how Death became responsible and ruler to Fame and Fortune.
From the poems I like “The Moon Sailed Sadly Through the Sky”.

I have to admit, I was skeptical of my decision to keep reading this book at first, thinking that somehow, someway, the stories would relate back to each other at the end. Although the genre of mystical/fantasy isn't my favorite, I did enjoy several of the stories as stand-alone pieces. I would say to give this book a chance; several of the selections are well-written and even comical at times. My favorites were the long-form poetry, especially those with a contemporary connection.

'The New Death and Others' is a collection of 44 stories and 19 poems. Some of the stories are so short they could be a vignette…if they’d been drawn instead of written.

Irreverent, cheeky, sarcastic and very amusing is how I’d describe this collection. I skipped only three items: Under the Pyramids, The Mirrors of Tuzun Thune and The Garden of Adompha because I couldn’t get into them. The rest were pretty funny, at least to me they were. I’ve been told I have a strange sense of humor sometimes though, so what amused me in this collection may not be quite so amusing to others.

*The author provided a copy of this book to me for review. Please see disclaimer page on my blog.

Some of the most quirky short stories and poems you will ever read. Just to name a few; How The Isle of Cats Got It's Name, The Prince of the Howling Forest, The Bird and The Two Trees. Do yourself a favor and read this book. You will love it, I did. I won this book from LibraryThing

You have subscribed to alerts for James Hutchings.

You have been added to James Hutchings's favorite list.

You can also sign-up to receive email notifications whenever James Hutchings releases a new book.