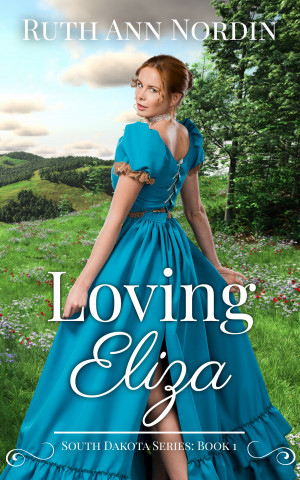 As soon as John sees Eliza, he falls in love with her. Not only is Eliza the most beautiful young lady he’s ever seen, but she isn’t put off by the fact that he’s mute. Since his mail-order bride didn’t come, he sees no reason why he can’t marry Eliza and make a home with her.

Eliza, however, knows very well why they can’t be together. She used to be a prostitute. John is a sweet man who’s never even kissed a woman. He deserves a virgin who can give him her innocence and a future with children. Eliza can do neither one for him. But while she insists he should wait to see if his mail-order bride is coming after all, she is taken in with his sweetness and charm. And soon, she’s torn between doing what is best for him and what her selfish heart wants.

About the Series: South Dakota Series

These romances feature a hero who is either mute, blind, or adopted.

I'm a fan of Ruth Ann Nordin's books! Each and every story is beautiful and Loving Eliza is one of my favorite. I love the way she writes...keeping it simple yet mesmerizing!!

(review of free book)
Minnie reviewed on June 10, 2013
(no rating)
John is woo sweet and his action in the end is very cute; pretending to be cold.

I just loved John... and the book.

Such a beautiful sweet story on second chances. I loved reading about the growing love between Eliza and John. Just simply wonderful to read.

I was so excited that Ms. Nordin wrote a book about Eliza. Eliza deserved some happiness after what she had been through as a teenager. Loved this book!!!

Bravo to Ruth for such an excellent story. John Evans is a mute but the town, and even some of his brothers, treat him as if he is also mentally ill. He was not sent to school so he cannot read or write but he does build beautiful furniture, he was the only one of five sons who wanted to learn his father's business, and he works at helping other towns people fix up their houses and yards as needed. He is waiting for a mail-order bride to come, Daphne O'Connor, but instead Eliza steps into his life, and it will never be the same.

Eliza had been attacked by an Uncle when she was fourteen and than sold to the owner of a whorehouse. The past thirteen years of her life had been spent in that place in Omaha, Nebraska. Pastor Peters had taught her about God and his forgiveness in her life and asked his cousin, Melanie, if she could work for her in South Dakota. So she just arrived on the stagecoach with Charity and her Aunt Bethany, Charity was to marry the town Marshal. After leaving those ladies she heads for Melanie's house but it stopped by an odd man who won't talk but keeps pointing to the church. She explains she is not his bride to be. When she finds Melanie has died, the man, John Evans, offers her a job and a small house to live in. She accepts.

The reader cannot help but fall in love with the silent man. With his actions and body language he is so endearing. Daily he points at his or Eliza's finger as to say, “will you marry me?” and everyday she refuses. Not for the reason John thinks. Eliza knows that Daphne may come and she will be sweet and pure, the type of woman John deserves. Not one with her past. Daphne does arrive and Eliza moves to town.

It is one adventure after the other. Eliza works for a nasty old woman and almost starves to death. She is busy avoiding the fellows wanting to court her and she avoids John. It is a book on forgiving yourself and others. Not assuming that if someone has a disability it takes away from who they are or how smart they are. Just an all round good read and I can't wait to read the next two books in this series.
**Sexual situations within marriage are very mild.

(reviewed 6 days after purchase)
michelle gatt reviewed on April 30, 2011
(no rating)
i first read a bride for tom and loved it and cant get enought of ruth ann nordins books this is another example of the excellent books she writes cant wait for the next one

I really enjoyed this story. I love the characters and how the author makes me care about them right away. I've read several books by Ruth Ann Nordin and I've not been disappointed yet. :)