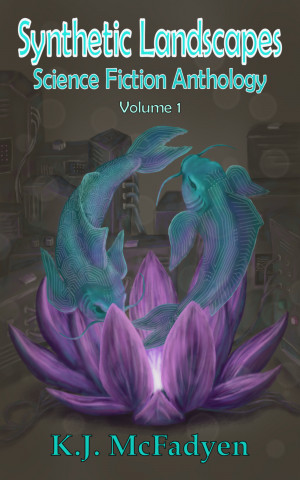 The Affairs of Catherine Hill Incorporated ~ Catherine Hill has a big problem. Brought before the judiciary council of the far-reaching Central Bank, she has been accused of the highest crime by one of the most influential corporations. Unfortunately, she is but a single woman in the presence of giants. With little worth and little support, how can one person plead for the value of their life amongst those whose daily trades concern millions?

Pasithea Reassembled ~ Pointed shoulders. Frayed hair. Asymmetrical eyes. Pasithea is hideous. No other place is better to display her ugliness than the trendy Club Future. Here patrons are sculpted to perfection with the latest body mods. Pasithea would never be granted entrance if it were not for her sister. And she is there for only one reason: to serve as a guinea pig for the new street drug known simply as Pan-Em.

Eternal September ~ It is a trying season for Hitomi. Her final examinations are coming. And everything is on the line for Hitomi to demonstrate her mastery of the Song. But her instructor is suspicious that she is not truly ready. For Hitomi has a secret that she cannot keep hidden from her mentor. It’s a secret that concerns a boy. And this secret could result in more terrible consequences than a mere failed exam.

Awaken, Hatshepsut! ~ What really awaits us after death? Kian Pious knows. He has an intimate relationship with the dead for he obtains their heads so that he may steal their memories. It’s a delicate operation made more complicated through the subtle damage caused by his victims’ cryopreservation. But the job is made more dangerous when Kian feels strange compulsions to return to the lives of his victims. Does Kian speak for the dead or do the dead speak through Kian?

Kevin McFadyen is a world traveller, a poor eater, a happy napper and occasional writer. When not typing frivolously on a keyboard, he is forcing Kait to jump endlessly on her bum knees or attempting to sabotage Derek in the latest boardgame. He prefers Earl Gray to English Breakfast but has been considering whether or not he should adopt a crippling addiction to coffee instead.

His love for stories started way back in his distant childhood when he enjoyed the classics: J.R.R. Tolkien, C.S. Lewis, Robert Aspirin and Lynn Abbey, Ursula Le Guin, Stephen King, Piers Anthony, Clive Cussler, H.P. Lovecraft and a slew more that aren’t currently on the nearby bookshelf. While video and boardgames may have supplanted some of his reading time, Kevin has committed his life and sanity to the crafting of his own narratives.

Having accumulated a number of short stories, this persistent scribbler has published his first book – a steampunk fantasy titled Thyre: City of Smoke and Shadow. His second full length novel – The Clockwork Caterpillar – is coming soon. Kevin continues to share his ideas on writing, media and life in the jointly own blog: Somewhere Post Culture (www.somewherepostculture.com).

You have subscribed to alerts for K.J. McFadyen.

You have been added to K.J. McFadyen's favorite list.

You can also sign-up to receive email notifications whenever K.J. McFadyen releases a new book.