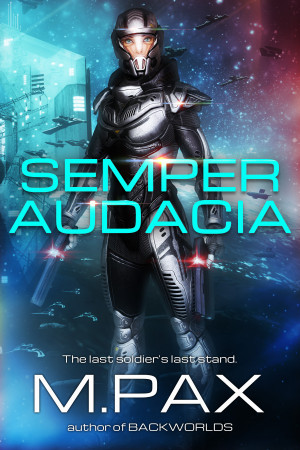 Semper Audacia
Leda is the last soldier standing. The siren blares. The enemy is coming. In an aging flyer, she heads out to meet the final battle, the last stand.

Whoa. Now this was somewhat an odd book and read. Interesting ideas about invasion future human evolution. I found I skipped bits and pieces that I found were just irrelevant. A good read.

A space opera novelette. This was more like it! Though this wasn't a full size novel or series, I felt satisfied. The depth of character, world-building, plot, action, adventure, all left me feeling like I'd been to outer-space, meet new beings, experienced friendships, saved and lost lives. In fact, this little book crammed more in than many long series I've read.

All that said, I found myself lost trying to figure out if this were memory or the present. In the end, it all sorts itself out. Maybe the author wanted that bit of confusion.

I recommend this little prize to my fellow sci-fi friends.

i'm not a sci-fi reader but i like how this story was written. it was short but full of emotions.

Note: This review was originally written for my author blog at www.mariaviolante.com

Semper Audacia, by M. Pax, is a "space-opera" novelette of roughly 13,000 words. I received a copy for free from the author for the review - and then I went out and bought it. No really, it was that good.

Let me start out this review by saying that I'm generally not a fan of shorter fiction. If it's under twenty-thousand words, most authors barely find time to squeeze in some exposition and introduce the main hook. As such, shorter works usually feel forced and one-dimensional. Now, don't get me wrong; I'm not saying that's true of all short fiction writers - some of my favorite works are shorter works of fiction (I'm looking at you, Neil Gaiman). I'm saying that it's hard, damn hard, to do it right.

That's why this novelette took me completely by surprise. Before I get into the good, though, let me touch on the few things I didn't like about it.

1. There were a few spots that needed a little polishing - a few commas, an adverb instead of an adjective, that sort of thing. I doubt your average reader would even notice, but as an ex-English teacher, those things really stick out to me. I think it says something that "Semper Audacia" was well - written enough that I was willing to overlook that; usually, I get to the second typo and feel like tossing the thing in the trash.

2.) I was a bit confused about how the races understood each other. Was there a piece of technology that did the translating? Were they bilingual?

Onto to the good:

***Warning, there are a few MINOR spoilers in here. If you don't want to read them, take my word for it - it's good - or download a sample and get a taste of the novelette for yourself.***

1. I think that one of the hardest things an author can do is write an engaging story in which the protagonist spends a lot of time in isolation. Human beings are social creatures and we cling to all things interpersonal. The fact that Leda is the last soldier, and largely alone, makes her part a difficult one to write. Yet M. Pax pulls it off swimmingly, largely due to the advent of the quasi-ghost brigades, the special suits, and the injection of relevant (and emotionally touching) flashbacks.

2. The language choice was excellent, as well. M. Pax creates her world through a rich combination of surprisingly accurate descriptors that invoke all five senses and convey a great sense of action, all without being overly wordy.

3. I loved the protagonist. She was complex, well - rounded, and remarkably human, and I quickly became caught up in her fears and struggles.

4. It's a good ending. I wish I could elaborate further on that, but I guess you're just going to have to read it - and at 99 cents, it's quite the steal. If you'd like to purchase your own copy, you can find it on Smashwords or Kindle.

You can see more information about this awesome Indie author on her personal website at mpaxauthor.com

(reviewed the day of purchase)
Loretta Stephenson reviewed on Oct. 2, 2011

I just finished Semper Audacia... Wow! It's full of intense feelings, drama, terrors and pathos. Relationships that were tender and loving, yet clothed in heartbreak. Courage, duty and devotion, yet also an eery technology that kind of made my skin crawl... on about 3 levels. ;-)

It was a high speed ride that kept me from going to bed until I got to the ending, which reached out and grabbed my emotions. This was NOT your typical or predictable space opera tale!

M. Pax has a descriptive yet poetic way of writing, even when talking techno-babble and describing crater pocked ugly moons! I was "there"... I could feel it, see it, almost smell it. It feels like she involves all your senses in the story. You don't just read it... you inhale it, hear it, ingest it, live it! Can you tell I LOVED Semper Audacia?!

Yep... I highly recommend it.

You have subscribed to Smashwords Alerts new release notifications for M. Pax.