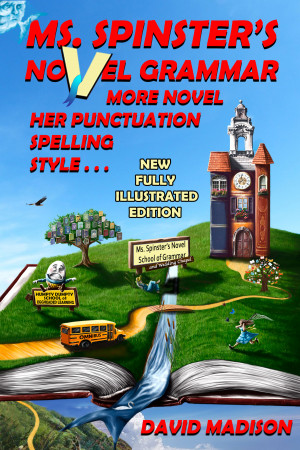 By David Madison
330 Novel Rules of grammar, punctuation, spelling, style—each one truly fabulous (in the manner of a fable), “a short narrative making an edifying or cautionary point, often employing as characters animals that speak and act like humans.”
500 celebrities glamorously bringing the rules to light and to life.
350 mirth-inducing photoshops, as colorfully novel as the celebrities they make light of. More
The Most Novel Grammar Book You’ll Ever READ

330 Novel Rules of Grammar, Punctuation, Spelling, Style, and more. And each is truly fabulous (in the manner of a fable), “a short narrative making an edifying or cautionary point, often employing as characters animals that speak and act like humans.”
500-plus celebrity-players—from Adam and Eve to Zorba the Greek—glamorously bringing the rules to light and to life.
350 mirth-inducing photoshops, as colorfully novel as the celebrities they make light of.
1 lovelorn spinster schoolmarm, a revolutionary.
836 laugh-and-learn pages (four happily illustrated books in one).

You know it: there’s nothing novel about trying to learn grammar the tedious old-school way. Bored to tears, sufferers are at great pains to talk more better, write more gooder, learn English how she is spoke. But reading, yes, actually READING this ingeniously revolutionary English grammar in the guise of an eccentrically comedic novel, what do we see? O child of Job!—only this: an inspired work so fabulously entertaining, so mercifully happy as to make learning grammar a joy; such that you can’t imagine ever being bored for an instant, especially knowing the dear dear author to be

A lingering relic of The Olde School, Ms. Spinster, in gingham dress and high lace boots, is the frustrated embodiment of a schoolmarm. When had she become Ms. Spinster? She can dimly recall having had a maiden name once, a perfectly young and lovely, oh-so-marriageable name (“Miss . . . Miss . . .”). But that is only half her frustration, albeit the largest half. Standing before the newest wave of the great unschooled, her frustration is complete: “If only there were a way to instill the rules of grammar in one ear—then keep them from rushing headlong out the other for being so insufferably lifeless and dreary that sufferers lie down in the aisle and fall fast asleep.”

That fateful morning, failing to lift a high lace boot high enough to get over one’s higher-than-normal level of boredom, it trips her up—but good. Falling face first into an open Child Star Weekly, she comes face to famous with an epiphany: “Of course! Children are as celebrity mad as anyone. What better way to pound common tense into emptyheads than by engaging the famous, and all the more mesmerizingly infamous, to indelibly impress each rule into little starstruck memory piggy banks? But why stop at grammar? I’ll go on to engage . . .”

No celebrity, past or present, comes at too high a cost. When her schoolmarm’s pittance is at last exhausted, and she is spent, Ms. Spinster has engaged some 500 glamour-dripping celebrities to make delightfully memorable 330 Novel Rules of grammar, punctuation, spelling, style, and more. But will one lead her to the altar and, at long last, make an honest name of Ms. Spinster?

You’re Invited to the Wedding!

A felicitous marriage of grammar and glamour, fiction and nonfiction, poetry and prose, tragedy and comedy, Ms. Spinster’s Novel Grammar is the marriage Ms. Spinster never realizes. Or does she?

Canadian by birth, expatriate by climate, David Madison is an inveterate idyller who idylls his time away writing idylls, that is, narrative poems, especially longer ones, such as "The Witch of Sulphur Mountain: The Supernatural Life of Agnes Baron, Meher Baba’s Beloved Watchdog."

And yet, as if being an inveterate idyller were not enough to recommend him to you, he is also a tireless fabulist, meaning, a fabulous writer. But if you’ve had the novel pleasure of reading his first published book, "Ms. Spinster’s Novel Grammar: More Novel Yet Her Punctation, Spelling, Style . . . ," you already know that. Each of the 330 tales illustrating a rule is written in the manner of a fable, “a short narrative making an edifying or cautionary point, often employing as characters animals that speak and act like humans.” He is a permanent resident of Belize, which, being situated below Mexico on the Caribbean Sea, is fabulous in its own right. But one look at a map will undeceive you: it is nowhere near as fabulous as he is. When he’s not being fabulous, in one sense, he spends the remainder of his waking hours answering the question What qualifies you to write a grammar book? His ready answer, marvelous for its concision, is that he has some five more years of school learning than Mark Twain, and far fewer cats. While those two seeming disqualifications are sinking in, he is quick to emphasize that he correctly said far fewer, not far less cats.

You have subscribed to alerts for David Madison.

You have been added to David Madison's favorite list.

You can also sign-up to receive email notifications whenever David Madison releases a new book.