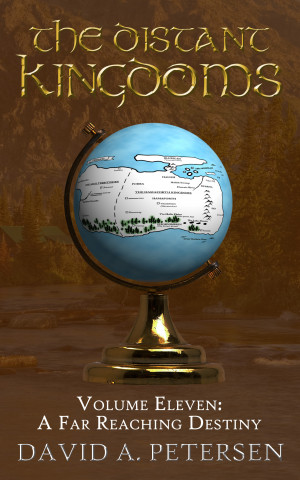 By David A Petersen
Colin Bourke has fled the city of Terrimorter, spurred on by the death and destruction wrought on that mighty metropolis by his own army. He has spent many months wandering the vast expanse of the Azzil Territories in an effort to rid himself of the images of the final battle of the war between the empire once under the rule of Jom Azzer and the Hamaforth Kingdoms. More
THE LANDMASS OF SESQUAIN- The mysterious sub-continent located to the west of the Azzil Territories.

THE NARROWS– A formation of a great many bridges built by the inhabitants of Sesquain.

Colin Bourke has fled the city of Terrimorter, spurred on by the death and destruction wrought on that mighty metropolis by his own army. He has spent many months wandering the vast expanse of the Azzil Territories in an effort to rid himself of the images of the final battle of the war between the empire once under the rule of Jom Azzer and the Hamaforth Kingdoms. At some stage of his journey, Colin chances across a modest town of no real importance where he rescues one of the local inhabitants from being badly beaten by a group of thugs right in the street.

The elderly woman, Trellia Fearen finds out that the very same gang that assailed her have also burnt down her house. Now removed from all ties to her former abode, she follows Colin further across the countryside where they happen to locate a farming family who share a strange discovery a touch further along the coastline. What they have found is a cabin cruiser which has obviously been transferred across from Earth during the activation of the Minerva Project. Colin spends no small time repairing the stranded vessel before he and his travelling companion decide to explore the Territories’ western coastline.

They discover the reason behind the lack of success of any prior expedition in the form of a vast tribe of people known as the Kell who mercilessly assail anyone they come across. After narrowly surviving the Kell, the two explorers continue on until they find a long cave system that eventually leads them to a massive lake. During their time exploring the far reaches of the lake, they discover other items have come across from Earth.

One of these entities is none other than the long-lost Ninth Roman Legion who have set up a community with the local people in a fortified town referred to as the Citadel. They in turn have also made a remarkable discovery some distance from their new home which turns out to be the Multi Linguistic Translation Satellite System, also known as the Tower of Babel System. This sytem is the reason behind everyone on Perencore being able to understand the dialect of all others, no matter their world of origin.

It soon becomes apparent that the Kell are massing in huge numbers just on the other side of The Narrows and intend to attack the Citadel with all their might. The Roman commanders and Colin develop a plan to counter the Kell invasion using the highly unusual resources at their disposal. Once the Kell attack has been defeated, the survivors return to their new community while Colin and a couple of new associates journey back to the farm- where a Territorian army is waiting. They promptly place Colin Bourke under arrest and then lead him in the direction of Terrimorter.