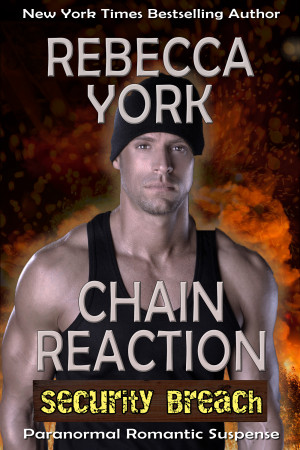 By Rebecca York
An explosion in a secret defense lab changes the lives of three men forever...

Gage Darnell never should have taken the job of security chief at Cranesbrook defense contractors. And when he rushes into the lab after a secret project goes up in smoke, he's exposed to vapors that leave him with a strange new power. But that's only the beginning of his problems. More
An explosion in a secret defense lab changes the lives of three men forever...

Gage Darnell never should have taken the job of security chief at Cranesbrook defense contractors. And when he rushes into the lab after a secret project goes up in smoke, he's exposed to vapors that leave him with a strange new power. But that's only the beginning of his problems. He wakes up confined to a mental hospital, and after he breaks out, he's framed for murder. His only way to escape from the cops is to "kidnap" his wife, Lily, who thinks he's crazed and dangerous. Will she trust him enough to come back to their marriage bed and then help clear his name and save both their lives?

Excerpt:
"Gage Darnell, you . . . you low-down liar. If you don’t come home today, don’t bother!"
Glad that he wasn’t standing face to face with his wife, Gage clenched his large hand around the telephone receiver. Cell phones were off-limits at the facility where he worked. He could only communicate with the outside world by landline.
But he had no trouble picturing the anger flashing in Lily’s beautiful green eyes. Or her blond hair swirling in a golden cloud as she shook her head. She probably had a pot of chili on the stove. And crisp clean sheets on the king-sized bed–since this was the first time in weeks that they were going to see each other.
He’d been aching to make love with her, then eat the wonderful meal she’d prepared while they caught up on the details of each other’s lives. And he’d hoped he could still make it home–at least for one night before he had to go back to work.
That was before two of his security men had called in sick, and he’d decided he had to stay on the Eastern Shore–because he hadn’t felt comfortable dumping the total responsibility for the Cranesbrook detail on Brayden Sloane.
He gulped and said, "Something’s come up, and I can’t leave Cranesbrook."
"I arranged to take off work this weekend. I thought you did, too. What’s going on now?"
While he tried to frame an answer, she plowed ahead. "You’re saying Cranesbrook Associates is more important than our marriage?"
He recognized the calm, deliberate tone. It was a dangerous sign.
"Gage, don’t you understand . . ."
Before she could finish the sentence, alarm bells began to clang in the monitoring station and somewhere else on the Cranesbrook campus. His gaze shot to the monitoring panel he’d installed in the lounge area. Either they had a false alarm–or an emergency in Lab 7.

A USA Today Best-Selling Author, Rebecca York is a 2011 recipient of the Romance Writers of America Centennial Award. Her career has focused on romantic suspense, often with paranormal elements.

Her 16 Berkley books and novellas include her nine-book werewolf “Moon” series. KILLING MOON was a launch book for the Berkley Sensation imprint. She has written 50 books for Harlequin Intrigue, many in her popular 43 Light Street series. Her upcoming releases include DARK WARRIOR for Berkley in September and DARK MAGIC for Carina Press in August. Two Harlequin Intrigues, SUDDEN INSIGHT and SUDDEN ATTRACTION, will be published in January and February, 2012, respectively.

She has written for Harlequin, Berkley, Dell, Tor, Carina Press, and Pageant Books.

Many of her novels have been nominated for or won RT Reviewers Choice awards. In addition, she has won a Prism Award, several New Jersey Romance Writers Golden Leaf awards and numerous other chapter awards.

More information is available on her Web site at www.RebeccaYork.com .

You have subscribed to alerts for Rebecca York.

You have been added to Rebecca York's favorite list.

You can also sign-up to receive email notifications whenever Rebecca York releases a new book.