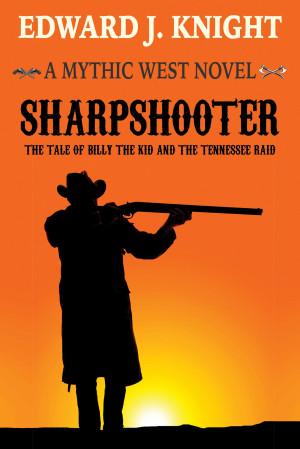 Sharpshooter: The Tale of Billy the Kid and the Tennessee Raid

Billy McCarty’s nightmares drove him to enlist as a sharpshooter. He just wants to put his heroics in Colorado behind him and kill giants.

Captain Mercer doesn’t care. He’ll use Billy’s skills and reputation however he can to ensure victory.

Even if that means both their deaths.

Edward J. Knight writes fantasy and science fiction from his home in Colorado. He’s put two satellites into orbit and is raising two children along with his partner, Sarah. He hates stories with idiot plots. More of his work and some occasional musings can be found at www.edwardjknight.com.

About the Series: The Mythic West

Gunfighters battle monsters of Legend in the Mythic West.

Also in Series: The Mythic West

Reviews of Sharpshooter: The Tale of Billy the Kid and the Tennessee Raid by Edward J. Knight

You have subscribed to alerts for Edward J. Knight.

You have been added to Edward J. Knight's favorite list.

You can also sign-up to receive email notifications whenever Edward J. Knight releases a new book.