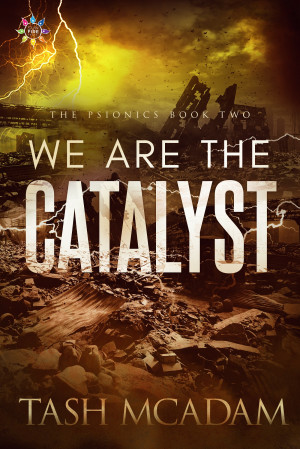 We are the Catalyst

Epsilon 17 appears to be just another mindless tool, empty of thought. But it’s a lie. The carefully constructed shell she hides behind protects her from their mind wipes. One day she will destroy the Institute. All she needs is a chance.

That chance could be Toby, if he doesn’t die first. He should never have left the safety of the suburbs, but cornered in an alley by a gang, he’s out of options. Of course, if he realized he had superpowers, he probably wouldn’t have been so worried. Unfortunately, they come at the cost of a finger, and his old life. Injured and panicked, he would have stayed on the dirty ground until the Institute came for him, if it wasn’t for Serena. Name-taking, ass-kicking Serena. She can punch through walls and practically fly, surely she can keep him safe…

But the Institute is sending Epsilon 17 to hunt him down, and she’s never lost a trail.

Can ARC, the mysterious group Serena works for, protect him? He has to get his powers in order, fast. It’s time for Toby to stand up for himself. An underground war is raging, and Toby’s just been drafted.
Available ebook formats: epub
Price: $6.99 USD
Buy Add to Library Give as a Gift
How gifting works
Create Widget
Tags: coming of age action lgbt paranormal science fiction sci fi dytopian
About Tash McAdam

Tash is a 30 year old teacher candidate at UBC in Canada, although they were born and raised in the hilly sheepland of Wales (and have lived in South Korea and Chile before settling down in Vancouver). Tash identifies as trans and queer and uses the neutral pronoun ‘they’. They’re also an English teacher and fully equipped to defend that grammar! They have a degree in computer science so their nerd chat makes sense, and a couple of black belts in karate which are very helpful when it comes to writing fight scenes.

Their novel writing endeavours began at the age of eight, and included passing floppy discs back and forth with a friend at swimming lessons. Since then, Tash has spent time falling in streams, out of trees, learning to juggle, dreaming about zombies, dancing, painting, learning and then teaching Karate, running away with the circus, and of course, writing.

They write fast-paced, plot-centric action adventure with diverse casts. They write the books that they wanted to read as a queer kid and young adult (and still do!)

Reviews of We are the Catalyst by Tash McAdam

You have subscribed to alerts for Tash McAdam.

You have been added to Tash McAdam's favorite list.

You can also sign-up to receive email notifications whenever Tash McAdam releases a new book.