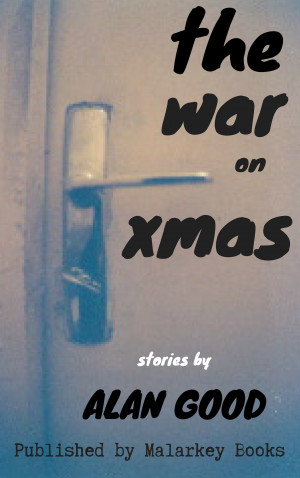 The War on Xmas

Several of the stories have been published in fine literary journals like Word Riot, Red Fez, and The Dead Mule School of Southern Literature, while three of them have never been published before.

The reader is advised that this book has almost nothing to do with either Christmas or Xmas.

Alan Good is a contributing editor at Malarkey Books. He writes humor and fiction, and his writing has appeared in Timothy McSweeney’s Internet Tendency, Bookslut, Atticus Review, Perversion Magazine, Memoir Mixtapes, The East Bay Review, Red Fez, Points in Case, Robot Butt, Soft Cartel, The Dead Mule School of Southern Literature, The Blotter, and Word Riot. He is the author of a novel called Barn Again: A Memoir and a collection of stories called The War on Xmas.

He also helps run derelictlit.com, a site dedicated to republishing work from defunct literary outlets. If you have writing that's disappeared because the original publisher shut down, feel free to get in touch.

You have subscribed to alerts for Alan Good.

You have been added to Alan Good's favorite list.

You can also sign-up to receive email notifications whenever Alan Good releases a new book.