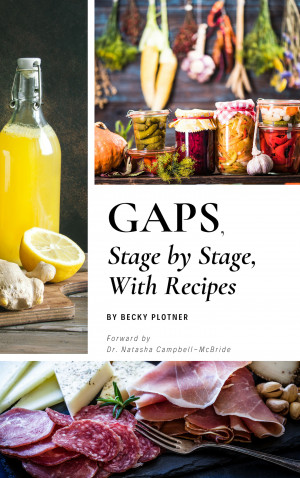 GAPS, Stage by Stage, With Recipes

When my son was 4.5 years old, he was ballistic. From the time he woke up to the time he went to bed, he was a human tornado, nonstop bouncing off the walls. Most everything in our house was broken. On several occasions, I had a black eye from an innocent hug, in a typical explosive manner. Sitting for school was impossible. He acted like a drug addict with uncontrollable behavior. He suffered from nose bleeds that made the house look like a crime scene investigation. Sometimes he was there, he was a joy and so funny he made your sides ache, but those times were rare. He had difficulty with tags on clothes or scratchy clothes. It felt like everything was an ordeal.

As a child, he had chronic croup which took us to the emergency room on more than one occasion with a blood oxygen level below 80 percent. His oral steroid intake was nine times that of a typical child.

As parents, we searched for answers in the only place we knew, in the medical community. We were sent from specialist to specialist looking for answers, seeking someone who could help. In the course of one summer, we spent $775 in co-pays (back when co-pays were $25 to $45 a visit) and were no further than when we started. We had labels such as autism (Asperger’s), ADHD, bipolar, hypoglycemia and dyslexia, but no direction. We hit our knees and began to see a major difference with food. By sticking to fresh, organic, real foods, while staying away from starches, grains, and sugars, while adding in traditionally fermented foods and soups from ancestors, he was a completely different boy. While he lost all labels and diagnosis, I found a different story.

After eating clean, issues that were masked while my body was in overdrive appeared. After three years of our journey, we found GAPS and were shocked to find there was someone else who found the same thing, yet, Dr. Natasha was naming the pathogens and explaining why everything was happening. We were elated to see her findings and jumped in to find the water was fine.

I went back to school and dug deep to the core of supporting the body, because when you support the body correctly, it can repair itself. Since I learn best by taking notes and writing things down, Nourishing Plot was born.

I work as a Naturopathic Doctor, traditional naturopath, Certified GAPS Practitioner and Doctor of Pastoral Sciences. Classified as a practitioner literate in Lyme and literate in Iodine, I see folks in my office, via Skype and phone (if applicable). As a specialist in Leaky Gut and parasitology, I’m fascinated at how perfectly and wonderfully we are made. I serve as the local Weston A. Price Chapter Leader, serve on Dr. Natasha Campbell-McBride’s GAPS Board of Directors and write for Nourishing Plot. As a mom, I want to shout from the rooftops, so that others don’t suffer from the damaging effect of today’s “food”.

Truth remains, when you support the body correctly, the body can repair itself.

You have subscribed to alerts for Becky Plotner.

You have been added to Becky Plotner's favorite list.

You can also sign-up to receive email notifications whenever Becky Plotner releases a new book.