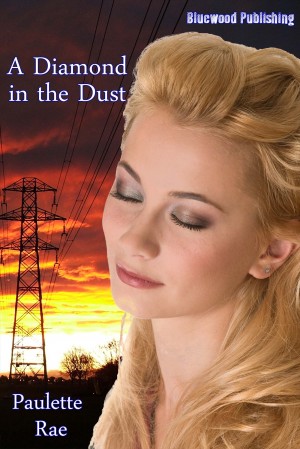 A Diamond in the Dust

By Paulette Rae
Jacob is a tyrant, double crossed by his right hand man; he sets out to even the score. Instead he finds Adrienne, Trapper's beautiful bride. Sent back to Earth for her fertility Adrienne is far away from everything she knows. When she is taken by a man hellbent on revenge, Adrienne is terrified, but slowly she realises that maybe the man they call Jaydee could do more for her than he realises.

Paulette was born in Christchurch, New Zealand. At the age of nine her parents moved to the Kenepuru Sound, where she attended a small rural school. There she met a teacher who awoke in her a passion for writing, which continued into her teenage years. Often she would write vivid imaginings of shipwrecks on deserted islands involving her classmates, to stave off the boredom of their regimented boarding school life. Her writing waned when adulthood struck, leading her back to Christchurch to start work. She quickly became absorbed in the computer industry, having been given a golden opportunity for on the job training with a local firm. At the age of twenty her career met a fork in the road and she became a solo mother, a move which quickly saw her on a fast track to becoming the independent woman she is now. Her husband Tony, whom she met at the age of twenty-four would argue this was not always a good thing! Together they have four children, one grandchild, two dogs, one cat and a healthy mortgage. An opportunity to attend a university course on creative writing was waved under her nose several years after they were married and she went on to attend the extended course also, giving her desire to write a much needed thrust back on track. Her first novel, Riding The Hurricane, was released in July 2008. She is an active member of Writing.com, and an avid supporter of local short story competitions, although longer works have always been her passion.

You have subscribed to alerts for Paulette Rae.

You have been added to Paulette Rae's favorite list.

You can also sign-up to receive email notifications whenever Paulette Rae releases a new book.