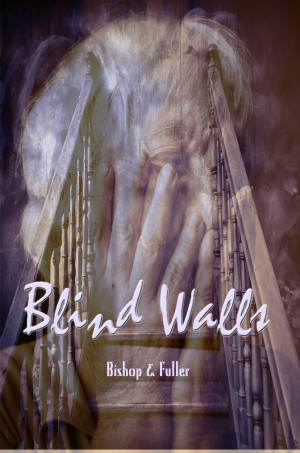 By Conrad Bishop
& Elizabeth Fuller
In a monstrous labyrinth of a mansion, a young carpenter lands his dream job and spends his next thirty-eight years serving a madwoman’s vision. More
A house of haunted ghosts: it's horror in a sense, but not so much of the "horror genre" as of the small daily torments to which our choices lead us.

Based on the enticing legend of the Winchester “Mystery” House—a labyrinthine edifice built by a guilt-ridden armaments heiress—the story is seen through a blind man’s eyes. Raymond Smolett, a veteran tour guide on the verge of retirement, leads his final hour’s gaggle of gawkers through the monstrous maze. For the first time in thirty years, he begins to see the spirits he's nattered about. A haunted house, but haunted by reality.

Yes, the bedeviled heiress is there, but what plays out in his blind sight is the life of Chuck Ratowitz, a young carpenter who lands his dream job, only to become a lifelong slave to a madwoman's obsession. His salary swells, his responsibilities mount, his ethics skew, and his marriage dissolves. His wife Dee hits bottom but makes it to shore.

Writers in collaboration, Conrad Bishop & Elizabeth Fuller were co-founders of Milwaukee’s Theatre X in 1969 and The Independent Eye in 1974. They have written over 60 produced plays, staged by Actors Theatre of Louisville, Circle Repertory, Mark Taper Forum, Denver Center Theatre, Barter Theatre, Asolo Theater Center, and many others, as well as by their own ensembles. They were twice recipients of playwriting fellowships from the NEA and six-time fellowship grantees of PA Council on the Arts. They have created work in collaboration with many theatres and colleges. They have written and produced six public radio series, broadcast on more than 80 stations, and were recipients of two Silver Reel Awards from the National Association of Community Broadcasters.

Bishop has a Stanford Ph.D. and has directed over 100 shows for the Eye and Theatre X as well as freelancing with regional theatres and colleges. He has also done extensive mask and puppet design, and has performed with the Eye throughout the USA.

Fuller has created more than 50 theatre scores, including music for The Tempest, The Winter’s Tale, Macbeth, Frankenstein, and Camino Real. She was twice recipient of Philadelphia’s Barrymore Award for theatre music. She has performed roles with Independent Eye for three decades, plus many guest roles.

You have subscribed to Smashwords Alerts new release notifications for Conrad Bishop.

You have been added to Conrad Bishop's favorite list.

You can also sign-up to receive email notifications whenever Conrad Bishop releases a new book.