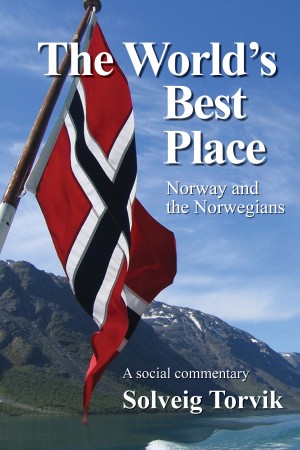 The World's Best Place Norway and the Norwegians

Solveig Torvik, a native of Norway, is a former newspaper reporter, editor, columnist, editorial writer and Washington, D.C., political correspondent. She is the author of Nikolai's Fortune, an historical novel based on the lives of four generations of women in her family in Finland, Norway and Idaho published by University of Washington Press in Seattle and Minerva Press in Helsinki, Finland.

I am a Canadian, living in Norway for four years. I am very sorry i paid for this diatribe. Although much of the factual information is correct, the interpretation of it is so biased, so pro-Yankee that i could only manage to force myself read sixty pages or so. Do not reward this piece of biased journalism. To equate norsk problems with American ones is like comparing a mouse with an elephant. Of course the norsk complain, they are human after all. And the norsk system certainly has it's flaws. But they don't let their police shoot black people for no reason other than being black. And they care about hungry children and the elderly.

A large part of the dark side of the society that Torvik reports is a legacy of Lutherism and the way in which it pervades contemporary norsk mores. Yes, the norsk are not the friendliest people, especially on first meeting. Yet, their definition of friendship -- as being about doing things, not just saying them -- means that i have a few very good friends, and the rest are polite enough to this 'utlandet'. The last time i went to Seattle i was overwhelmed by street beggars. It was shocking. How can a country let so many of its population suffer like this? I know which society i would choose....

And finally, as an academic i follow rules of evidence. This writing is not fact-based, it is calumny. Don't buy this book, please. if you want to read about the down sides to the norsk, and Scandinavia distopia, instead, take a look at "The almost Nearly Perfect People" by Michael Booth. He picks apart the downsides of norsk life without stooping to innuendo and diatribe.

Excellent!! Excellent!! Excellent!! I moved to Norway 3 years ago from England to live with my half Norwegian husband. It has taken me 3 years to see Norway for what it really is and you have just reinforced my view. As an educated, competative, liberal, individualistic woman I feel this country holds little for me. Thank you a truly great read.

Recently moved to Norway from England and this book was just what I needed to give me a meaningful insight about the country. After only a few months of been in Norway, serious questions about the way Norwegian do things had surfaced in me and this book truly helped me to understand why.

Thank you Solveig Torvik, your effort writing this book has made a difference in my life.

This book and Nicolai's Fortune gave me a terrific preparation for a trip to Norway this month. I was able to speak with people I met there about many different aspects of their lives in a way I would never have been able to do without this detailed and thoughtful book.
I have been so saddened by the violence there, but as I watch the response of the PM, some of the victims and others speaking for Norway - I keep on returning to the chapter on Religion. For a country with a national church, the response to the tragedies has been the most humane, most loving, non hate-filled, non religion-spouting that I have heard in my 60 years. No mention of God or evil-doers in the English translations I have heard from Stoltenberg or others. I wish more people would take notice of this response - especially in a country that has an official church and no real church-state separation, and yet more church-state separation than I have ever seen in the US.

Thank you Solveig Torvik for opening my eyes to so much in this fascination country.

I liked the book though it seemed critical of Norway. Its difficult to compare Norway and US, maybe Norway and Minnesota? US politics and society are hardly a shining beacon to the rest of the world. If you want to learn more about Norway, written by an American buy this book.

Very good.
I liked it very much because it gives you a picture of the Norwegian society and it is full of data and references.

(reviewed 41 days after purchase)
robert olsen reviewed on May 17, 2010
(no rating)
There are not many very good books about Norway, written in English.This is one of the best.Most books deal with tourist topics.This book gives the reader an in depth understanding of the culture,politics and economics of modern Norway.Solveig Torik is a skilled and engaging writer giving us clear insight into the modern Norwegian mind.Norway is no longer just a land of colorful Bunads and goats on the mountains.This book gives a glimpse as to how wealthy modern norway( wealtihest world Country ,per capita) has evolved from it's past poverty.
Review by Professor Robert Olsen

(reviewed 22 days after purchase)
Archie Satterfield reviewed on Feb. 22, 2010
(no rating)
Solveig Torvik is one of the most perceptive and eloquent writers I have had the privilege of knowing. We worked together six years on the Seattle Post-Intelligencer and I always enjoyed her commentary on things, whether in conversation or in stories and opinion pieces she wrote for the paper. Her earlier book, Nikolai's Fortune, was much on her mind in those days thirty years ago, and the long wait for it was well worth it. Certain scenes and observations from that book still haunt me. So now she has gone back to basic journalism to report on her home country of Norway, and as before, the wait is worth it. Her reporting style is close to the ground rather than lofty, and some of the most powerful sections are the direct quotes she elicits from Norwegians. Norway is a wonderful country, but she reminds us it is populated with people, and people are imperfect critters. For this reader, the weight of public opinion is almost overwhelming at times, the pressure on everyone to conform, the benevolence that comes with a social price and high expectations. Norway is a wonderful country and its citizens are very well cared for by the government and society at large. But it comes at a price of individuality that would eventually send most Americans back to this much more imperfect nation. -- Archie Satterfield

You have subscribed to alerts for Solveig Torvik.

You have been added to Solveig Torvik's favorite list.

You can also sign-up to receive email notifications whenever Solveig Torvik releases a new book.