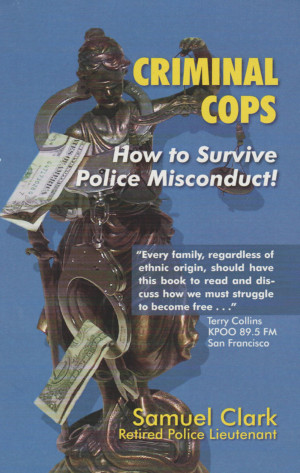 By Samuel Clark
Criminal Cops was written by retired Newark Police Lieutenant Samuel Clark. Mr. Clark was a member of the Newark New Jersey Police Department for more than 25 years. During his tenure with the department he has written numerous official complaints about serious acts of police misconduct.
This book provides suggestions about what to do when you are confronted by the police in certain situations. More
Samuel Clark was a member of the Newark New Jersey Police Department for more than twenty-five years. While Clark was a supervisor with the Newark Police Department he wrote numerous official police reports complaining about corruption, discrimination, differential treatment, violations of citizens and police officers Constitutional Rights, and severe problems with the Internal Affairs Division. None of Clark’s complaints was thoroughly investigated.
In 1996, and 1997, Samuel Clark wrote an official police report complaining that Officer Darren Nance was unlawfully terminated. Nearly fourteen years after Clark filed his complaint a Federal Jury determined that Darren Nance was unlawfully terminated, and that upper management employees of the City of Newark actually participated in, or were willfully indifferent to the wrongful conduct. Yet, Samuel Clark was the only supervisor in the entire Newark Police Department with the ability to discover this unlawful conduct.
Retired Lieutenant Samuel Clark presently devotes his time to helping victims of police misconduct, working as a consultant and expert witness, and informing the public about the negative consequences of systemic police corruption. He has been interviewed by several television news reporters and has appeared as a guest on numerous television and radio programs to discuss police corruption, racist differential treatment and retaliatory false charges in the police disciplinary process. Clark is an expert in the areas of Police Procedures and Police Internal Investigations and Discipline. He has a Bachelor of Arts in Criminal Justice from Thomas Edison State College, and has addressed various government committees and councils about police misconduct, corruption, differential treatment and retaliation facilitated by the police internal disciplinary system and high-ranking police supervisors. Clark also researches incidents of differential treatment by the internal disciplinary systems of fire departments. Clark is also the author of “Total Misconduct” A Factual Account of Police and Political Corruption.
Mr. Clark appeared in the special features (The Thin Blue Line) of the DVD edition of “Righteous Kill,” starring Robert DeNiro and Al Pacino.
Available ebook formats: epub mobi pdf rtf lrf pdb txt html
First 15% Sample: epub mobi (Kindle) lrf more Online Reader
pdb
Price: $1.99 USD
Buy Add to Library Give as a Gift
How gifting works
Create Widget
Tags: thug cops police misconduct bribe police brutality thug cops police brutality police m isconduct
About Samuel Clark

Review
Tommy Lebron reviewed on March 21, 2012
(no rating)
Great informative book which reinforced all of my beliefs about the corrupt and prejudiced police system. I too encountered similar experiences as a disabled worker attempting to work as a civilian at New York City Police Headquarters. They harassed and tormented me and made sure that I never got past the probationary period. At the time I thought I was treated that way because I was a disabled Black man. This book shows me that these demons also torment healthy African Americans as well.

You have subscribed to alerts for Samuel Clark.