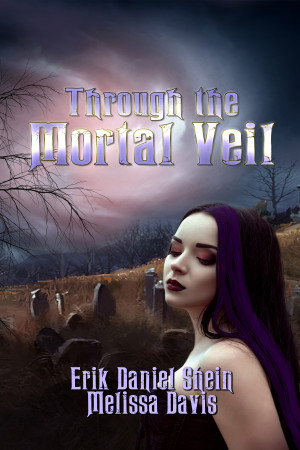 Through the Mortal Veil

The only thing that makes the move bearable is the fact that her twin brother Crow is just as miserable as she is. The moment the teens turn sixteen, their lives take a bizarre turn as a dormant magic awakes within them. They are called to the one place that keeps them safe from the things that go bump in the night: the mortal veil.

As they slip through the veil, they find that their destiny awaits on the other side. They must find a way to close the veil to keep their world safe from the evil that wishes to destroy it. Never one to back down from a challenge, Indigo is prepared to take on the trials ahead of her, but Hevexa is filled with dangers in all shapes and sizes, monsters that exist outside of her wildest imagination.

Will they be able to restore the veil before the monsters of Hevexa take over their world? Or would they lose themselves to the darkness on the other side?
Available ebook formats: epub mobi pdf lrf pdb txt html
First 20% Sample: mobi (Kindle) lrf pdb Online Reader
Price: $3.99 USD
Buy Add to Library Give as a Gift
How gifting works
Create Widget
Tags: suspense adventure fantasy paranormal magic dark fantasy teen young adult
About Erik Daniel Shein

Erik Daniel Shein was born Erik Daniel Stoops, November 18th 1966. He is an American writer, and Visionary, film producer, screenwriter, voice actor, animator, entrepreneur, entertainer, and philanthropist, Pet enthusiast and animal health advocate. He is the author and co-authored of over 30 nonfiction and fiction books whose writings include six scientific articles in the field of herpetology. His children’s book, “The Forgotten Ornament” is a Christmas classic, and was endorsed by Hollywood legends Mickey and Jan Rooney.

You have subscribed to alerts for Erik Daniel Shein.

You have been added to Erik Daniel Shein's favorite list.

You can also sign-up to receive email notifications whenever Erik Daniel Shein releases a new book.