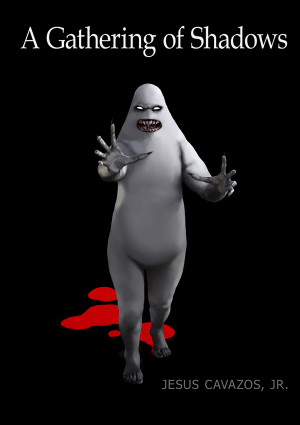 A Gathering of Shadows

Cursed to hunt and kill creatures of death and destruction known as Shadows, Simonson must hunt them across the ages and the continent. Along the way he finds and loses friends and allies in his struggle to save mankind from its most devastating enemy, himself. In the end, Simonson hopes to achieve his greatest desire, to be allowed to die and join his family dead for all these many centuries. More
When the world was born, a force moved over it and shaped it to its liking. Beings born in its wake tried to change the world to fit them. The force took the world back and gave it to new beings that had been created. Wanting revenge on the new beings, the Old Ones perverted some of the New Ones so they would kill the un-perverted. These creatures were called Shadows.

Guilty of crimes against man in the name of religion, Simonson has been tasked with finding and killing the Shadows. As further punishment, he is not allowed to use weapons to kill the monsters. He could only use his hands and whatever items he can find around him. Traveling through the ages and across the continent in search of these creatures of death and destruction, Simonson finds and loses friends and allies along the way, hoping to one day to be allowed to die so he can join his family.

Jesus Cavazos Jr. has been creating stories all of his life. At first, he told the stories only to himself. Then he began writing them down. After a few years, he turned to oral stories. For over two decades, while telling his stories, he gained a reputation as a wordsmith.

Though being a bard was satisfying, he found more joy in writing down different kinds of stories. So, for the last few years, he has concentrated on writing down his imagination. These Shadow stories are but the first of those he has written down.

Reviews of A Gathering of Shadows by Jesus Cavazos, Jr

You have subscribed to Smashwords Alerts new release notifications for Jesus Cavazos, Jr.

You have been added to Jesus Cavazos, Jr's favorite list.

You can also sign-up to receive email notifications whenever Jesus Cavazos, Jr releases a new book.