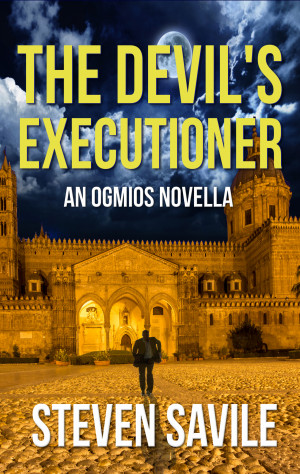 The Devil's Executioner- An Ogmios Novella

By Steven Savile
When the old man brings him back in urgently, Konstantin Khavin knows it’s trouble. The kind of trouble the big Russian excels in. A clandestine meeting with an informant leads to a gun, an SR-1 Vektor, which is the weapon of choice for the Russian secret service. The gun is the first step on a path to enlightenment that has nothing to do with the divine but will leave him in need of a miracle. More
Konstantin Khavin isn’t a religious man. His faith doesn’t reside in some higher power. He follows a darker path. He believes in the worst of mankind. He’s seldom disappointed.

When the old man brings him back in urgently, Konstantin knows it’s trouble. The kind of trouble the big Russian excels in. A clandestine meeting with an informant leads to a gun, an SR-1 Vektor, which is the weapon of choice for the Russian secret service. The gun is the first step on a path to enlightenment that has nothing to do with the divine but will leave Khavin in need of a miracle.

But this is what he lives for.

And more importantly, what he’s prepared to die for.

Praise for the Ogmios Directive Stories

"A wild combination of Indiana Jones, The Da Vinci Code, and The Omen." -- Kevin J Anderson, international bestselling author of THE SAGA OF SEVEN SUNS and co-author of PAUL OF DUNE

"Savile's in a league of his own" --Jeremy Duns, author of FREE AGENT and FREE

Steven Savile has no life. It's official. That's probably the most important thing you can know about him. So, now we've got that out of the way, the good stuff, like what's he done, where and to whom.

Steve's a man of many hats - like many people without hair.

Hat number one, the bright colourful scotch tweed flat cap, is Steve's original fiction. Most recently he has written SILVER. You might have noticed it. It takes up a good 90% of this site. If you didn't notice it you're probably not reading this bit either, so I guess we'll forgive you, not that you'll notice. His other stuff include various novels and short story collections like The Hollow Earth, Temple: Incarnations, Laughing Boy's Shadow, Houdini's Last Illusion, Angel Road, and the graphic novel Fragrance of You (with artist Robert Sammelin). Steve was a runner up in the 2000 British Fantasy Awards, a winner of a 2002 Writers of the Future Award, and was nominated for the inaugural 2006 Scribe Award for best novel adaptation for his novel Slaine: The Exile. His novel Primeval: Shadow of the Jaguar is currently nominated for the 2008 Scribe Award for Best Young Adult Novel. Fingers and toes are naturally crossed.

Hat number two is his tie-in writing. Steve is the author of the Von Carstein Vampire trilogy (Inheritance, Dominion, Retribution) set in Games Workshop's popular Warhammer world. The individual books were gathered together into the omnibus edition, Vampire Wars, and Steve being the awkward so and so he is went and rewrote the last chapter of the last book just for that omnibus. It isn't often we get a chance to put right what once went wrong, so to speak, so apologies to everyone who read the original ending. Go to the local bookshop and check out the new end. Tell them Steve sent you if they hassle you about reading in the corner without buying the book! His final book for Games Workshop, Curse of the Necrarch, features a 60 year old hero who has a heartattack right around the page 50, and is all about the futility of heroism and war as it's generally portrayed in fantasy novels. Let's just say it was a brave book for Games Workshop to publish and opinion seems to be split down the middle as to whether it is the best or worst thing he's ever written, so he must have done something right, eh? Steve's also written the best-selling original audio novel Torchwood: Hidden for BBC Audiobooks. It was read by Naoko Mori who plays Toshiko Sato in the BBC series. One might think Steve has a thing for the lovely Naoko, as his Torchwood short story in the Yearbook released by Titan in 2008 also had a huge picture of the lovely (did we already say that) Naoko right beside his story Black Water. He also wrote the first novel based in the Primeval universe, Shadow of the Jaguar, which was a #1 bestseller in the UK. The other one you might have seen cluttering up bookshelves in dusty bookstores would be his Slaine duology which was published by Black Flame (Slaine The Exile and Slaine The Defiler). We say duology, the series was originally conceived as a trilogy and ends on a whopping cliffhanger, so again, sorry folks! Lots of apologising going on here. The rights to Slaine have reverted to Rebellion, so whether or not the trilogy will ever get its final installment is very much in their hands. Back when he was a wee lad Steve also wrote a series Star Wars books including a kids adaptation of Return of the Jedi, for Hendersons, part of Dorling Kindersley, a Jurassic Park fun fax file, and short stories four incarnations of The Doctor. Yep, that Doctor. The time lord. Tardis. His next media tie-in is an original Stargate SG-1 adventure, Shadows.

Hat number three is his editorial one. He has edited a number of critically acclaimed anthologies, including Elemental, Redbrick Eden, and Doctor Who Short Trips: Destination Prague. He also compiled Smoke Ghost & Other Apparitions and Black Gondolier and Other Stories, the collected horror stories of Fritz Leiber.

Hat number four, the dapper bowler hat, is collaborative work. Steve recently finished a weird western with David Niall Wilson, Hallowed Ground, and is working with James Moore on a YA trilogy, the first book of which Death Knell is rattling away on their keyboards while you read this. It is, promise you. Neither of those boys sleep. And then there's the red-headed stepchild of my writing career, Brian M. Logan, that action guy, who I'm currently plotting world domination with. We've got six full blown novels pretty much outlined in serious detail, ranging from supernatural thriller to classic Fog-like horror by way of noir monster madness. Trust me, you'll be hearing more about Bri.

So what's next you ask breathlessly? Well, in no particular order, there's a short story collection from Dark Regions Press, which has no name and Steve calls The Incompleat, because, well it is... a new adventure for the crew from The Hollow Earth, called London Macabre, and Gold, the sequel to Silver. Original title eh? Never saw that one coming... but can you guess what the follow-up to Gold will be called? Well? Answers on a postcard please... you might win a prize. Maybe.