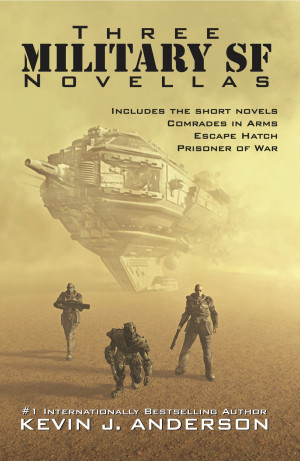 By Kevin J Anderson
Three action-packed military SF short novels, written by #1 internationally bestselling author Kevin J. Anderson. Includes Comrades in Arms, Escape Hatch, and Prisoner of War. More
What if you were trapped on an alien battlefield with an enemy soldier as your only companion—and both armies are hunting you down to kill you?
What if you were designated as cannon fodder fighting against a bloodthirsty alien invasion, assigned to die just so an incompetent commanding officer walks away unscathed?

What if you were born and bred to be a heartless, deadly soldier in a future war—a killing machine—and you suddenly had a chance for peace?

You have subscribed to alerts for Kevin J Anderson.