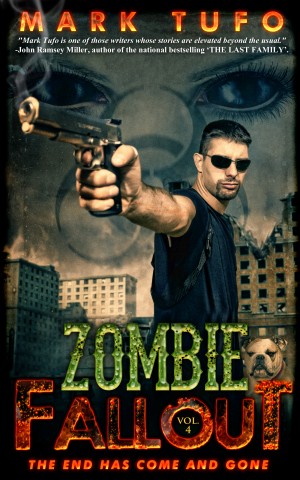 Zombie Fallout 4: The End Has Come and Gone ...

Mark Tufo was born in Boston Massachusetts. He attended UMASS Amherst where he obtained a BA and later joined the US Marine Corp. He was stationed in Parris Island SC, Twenty Nine Palms CA and Kaneohe Bay Hawaii. After his tour he went into the Human Resources field with a worldwide financial institution and has gone back to college at CTU to complete his masters. He lives in Colorado with his wife, three kids and two English bulldogs. Visit him at marktufo.com for news on his next two installments of the Indian Hill trilogy and his latest book Zombie Fallout

Mark Tufo is an undiscovered gem in the world of indie authors and publishers! I am an absolute rabid fan of anything zombie, ye I have been unable to read 99 percent of the apocalyptic books out there. Finally, I discovered this amazing author and his series. I can never explain how great it is, his writing is easy to read, smooth, and his story lines are both plausible and enough to keep you up at night! In case of an actual zombie apocalypse, it will be Mark's house that I try to get to! Lol! Unlike a lot of authors, mark is wonderfully accessible and present for all comments by his viewers and fans. I can't say enough great things about this author! I am a fan for life, even after three books!

(reviewed the day of purchase)
Byron MacAlpine reviewed on Dec. 12, 2011

The best set of zombie novels I have read to date....and I have read most! The Talbots sound like my kind of family. I hope there are more to come!

I have all of this series and can't wait for more.

Great zombie book hope there is more to come.

Can't say enough about this series!!! When I found out this wasn't the last book I cheered outloud. Having read just about all the zombie books out there, I can safely say this one beats all. Not only does it have the great survival stuff this is sooooooo funny. The Talbot family is my favorite characters to date and I would and have recommened this series to all. Doesn't leave you wanting more except for the next book. I will be sad when it ends.

This will be the first review I've ever written for anything, so bear with me.

I had come across Mark Tufo and his Zombie Fallout series somewhere around a month ago. I'm pretty sure it was only the second paragraph when I started laughing uncontrollably. I knew right then that I found a hidden gem. I plowed through the book in a matter of a day or so, only stopping to sleep (yes, I would eat and read, and even go to the crapper.) I quickly went to get the second book and it didn't disappoint. Of course I read the third and I was left saying "shit, I really hope that there is a fourth book coming out to tie this up, because I hate sitting around for years just to have closure." and wouldn't ya' know it, the book was already done and in editing! At the time there was no release date, but I knew it was only a matter of time.
I decided to see what else Mark had written and was really surprised to come across Dr. Hugh Mann, the prequel to the ZF series. Much like the others, it was phenomenally written and encapsulated (am I using this word properly? Probably not.) me. This book was fairly short and I finished it within hours. I'm pretty sure it was the day after I went skulking around on the internet to maybe dig up a release date on ZF4. There was!! It was scheduled to be out on eBook format Oct. 1st. It was actually out on the 30th, I think, but couldn't buy it until the morning of the 1st. The days leading up to the 1st were long and excruciating. I needed to know if Michael was going to get Tommy back, and how the story would wrap up. The 1st came and I bought the book and immediately started reading. Maybe it was the week or so I had went without reading any Tufo, but the book definitely seemed different. I still can't quite place my finger on it. I can't say I was too fond of the switching between different characters (from Mike, to BT and Merideth, to Alex and Paul.) Don't get me wrong, BT is probably my favorite character, but I preferred it when you would only follow Mike. The sense of continuity was gone. Again, not necessarily a bad thing, just a preference of mine.
The plot was amazing. We saw more of the "humanity losing all holds of any morals" with the raping of a young boy, then burning him little by little. It's like the book will place a toe over the line you're told not to cross really quickly, and then pulls it back before it's caught. You know you went there, but you didn't completely cross the line. New characters were added, those being MJ, Brian, Jack, Cindy, and Perla (I thought this name was funny.) Apart from MJ, I never got the sense of knowing any of the other characters. Maybe it's just because I'm not too welcoming to any newcomers this late into the game.
I'd say the biggest plot twist of the book was when Tomas decided to turn Mike into a half Vamp. It was completely unexpected for me, but at the same time I welcomed it like a bottle of water after being left in the Sahara Desert for 3 days. Watching Mike Beat the living hell out of Durgan was bittersweet. I'm hoping with ZF5 (Mark, you better not chince out!!!) he can develop his powers. I'm still really hopeful that Tommy will come back to us. Such an interval character can't just turn bad like that, can he? I'm pretty sure everyone wants Poptart eating, smiling Tommy back.
While reading the book I did notice one or two spelling errors (and no, I'm not referring to the way Mike writes, these were probably just overlooked during editing) along with a few grammatical ones (the word "Dodge" was capitalized as if it was talking about the truck, but it was talking about moving out of the way.) I'm sure the book will get another once over anyways, so no big deal. I can't quote all of them though, because I'm a lazy-ass.

So, overall I was quite pleased with the book. I certainly can't say it's my favorite of the series, but it holds it's respective place alongside all the rest. Mark, if you're reading this, PLEASE make ZF5. I can't go on in life if I don't get closure with this series. The characters are too loved for that. Keep making wonderful books, and I'll keep purchasing/reading them.

You have subscribed to alerts for Mark Tufo.

You have been added to Mark Tufo's favorite list.

You can also sign-up to receive email notifications whenever Mark Tufo releases a new book.