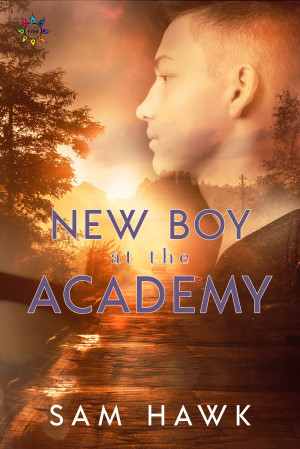 New Boy at the Academy

By Sam Hawk
Can a shy gay boy, his punk rocker crush, and a girl from the wrong side of the tracks rule the school? More
Timmy had no clue that the first day of 10th grade at the Academy would rock his world. He thought it would be just like last year, with its endless bullying and recesses spent reshelving books in the library with his best and only friend Carleen. The sissy boy and the fat girl had bonded over their shared outcast status. But Carleen shows up filled with sassy confidence and declares they’re going to rule the school. By Christmas, the freaks and nerds would be the cool kids, and the mean girls and jocks would be the outcasts. Something had happened to her over the summer, but what?

And then, the two of them lay eyes on the new boy at the Academy. Doug has auburn feathered hair, veiny biceps, and green eyes the color of Sprite bottles. Plus, he’s come all the way from exotic Los Angeles, California. He rocks out to Patti Smith while Timmy loves ABBA. How does someone so cool end up in tiny, conservative Edgewood, South Carolina?

When Carleen immediately declares Doug a fox and her new prospective boyfriend, Timmy is shocked at his jealous reaction. He’s not supposed to like boys in that way, is he? Doug stirs up weird new emotions deep inside him as Timmy embarks on the adventure of his life. He and his hometown will never be the same.

Price: $6.49
$3.25 USD
Buy with coupon Use the code SSW50 at checkout for 50% off during our site-wide promotion!
(Offer good through July 31, 2020 )
Have a better coupon?
Add to cart, then apply your coupon
Add to Library Give as a Gift
How gifting works
Create Widget
Tags: coming of age family drama gay lgbt high school coming out
About Sam Hawk

Sam Hawk’s fiction is inspired by his experiences at a private Christian Academy in rural South Carolina in the ’70s. He survived his Southern adolescence with his sanity relatively intact and went on to earn degrees from the College of Charleston and the University of South Carolina Law School. He also served in the U.S. Army as a JAG officer for twelve years. He resigned his commission when it became clear he was expected to persecute homosexuals as part of his job.

Sam then moved to Dallas, Texas where he met the man of his dreams and found his LGBT family. Sam and his husband have been married for over ten years and live with their Corgi and Chartreux cat in the requisite charming old house in a historic district where gay couples are legally compelled to live.

You have subscribed to alerts for Sam Hawk.

You have been added to Sam Hawk's favorite list.

You can also sign-up to receive email notifications whenever Sam Hawk releases a new book.