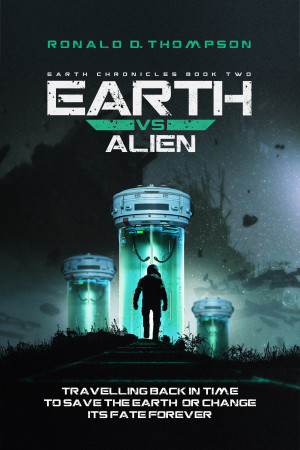 By Ronald D Thompson
The Earth is divided into 44 regions, overrun by aliens and human numbers are diminishing. More
2218

The Earth is divided into 44 regions, overrun by aliens and human numbers are diminishing.

Humans must disprove alien claims to Earth by uncovering evidence in Earth’s past. The time capsule is their only chance, but Robert Stave has sabotaged the capsule for his own gain. He must be stopped if humans are to prevail but that involves using other time capsules against the wishes of the galactic police – the Council of the Light.

With the added threat that the rebel humans, led by Zak Lancelot, are poised to take matters into their own hands, time is running out!

Will the Earth become one ever changing present or a myriad of possible timelines, or will those in the future further complicate an already compromised present in this battle of Earth vs Alien?

Ronald D Thompson is a new author who’s ambition for many years has been to publish a book. At 58 years old, with a wealth of experience in business and the Managing Director of a leading company working in the Education Sector, he decided in December 2015 to stop procrastinating and get on with the task of completing his first novel.

‘Earth in Torment’ was born.

With an intense interest in quantum mechanics, astronomy, the origins of our universe coupled with the possibility of extra-terrestrial life it wasn’t difficult to choose sci-fi as the genre for the book. A heavily cast plot in this first novel, one of a series, sets the tone for a white knuckle adventure as we follow the protagonist Robert Stave, who takes on the task of trying to alter an unsavoury multi alien existence by travelling back in time.

The second in the series is already underway and the target is to get this book to market by the summer of 2018.

You have subscribed to alerts for Ronald D Thompson.

You have been added to Ronald D Thompson's favorite list.

You can also sign-up to receive email notifications whenever Ronald D Thompson releases a new book.