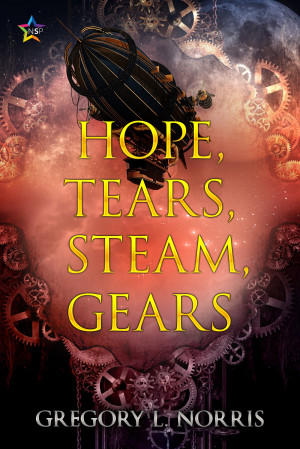 The attraction between Donovan and Flynn ignites from the moment they meet and follows them through the dangerous political climate of Her Majesty’s jeweled city as dark powers seek to dismantle the clean-based power poised to send humanity to the stars.
Available ebook formats: epub
Price: $2.99 USD
Buy Add to Library Give as a Gift
How gifting works
Create Widget
Tags: romance gay lgbt fantasy science fiction steampunk
About Gregory L. Norris

Raised on a healthy diet of creature double features and classic SF television, Gregory L. Norris is a full-time professional writer, with work appearing in numerous short story anthologies, national magazines, novels, the occasional TV episode, and, so far, one produced feature film (Brutal Colors, which debuted on Amazon Prime January 2016). A former feature writer and columnist at Sci Fi, the official magazine of the Sci Fi Channel (before all those ridiculous Ys invaded), he once worked as a screenwriter on two episodes of Paramount’s modern classic, Star Trek: Voyager. Two of his paranormal novels (written under my rom-de-plume, Jo Atkinson) were published by Home Shopping Network as part of their “Escape With Romance” line — the first time HSN has offered novels to their global customer base. He judged the 2012 Lambda Awards in the SF/F/H category. Three times now, his stories have notched Honorable Mentions in Ellen Datlow’s Best-of books. In May 2016, he traveled to Hollywood to accept HM in the Roswell Awards in Short SF Writing.His story “Drowning” appears in the Italian anthology THE BEAUTY OF DEATH 2, alongside tales by none other than Peter Straub and Clive Barker. Follow his literary adventures at www.gregorylnorris.blogspot.com.

You have subscribed to alerts for Gregory L. Norris.

You have been added to Gregory L. Norris's favorite list.

You can also sign-up to receive email notifications whenever Gregory L. Norris releases a new book.