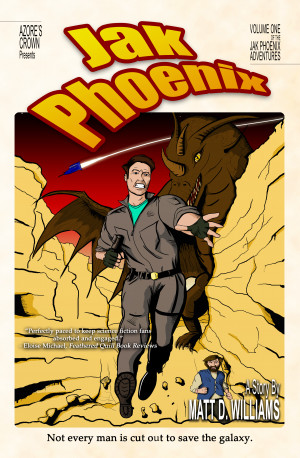 By Matt D. Williams
Rated 3.67/5 based on 3 reviews
Jak is a pilot who would rather kick back with a cold drink than stick his neck out to save the galaxy. But, as we all know, life often gets in the way of these ‘big dreams.’

In the spirit of space operas of old, comes a light hearted, action packed novel following the exploits of the best low quality pirate in the galaxy - Jak Phoenix. More
Jak Phoenix is a pilot who would rather kick back with a cold drink than stick his neck out to save the galaxy. But, as we all know, life often gets in the way of these 'big dreams.'

Jak and his longtime friend Baxter once again find themselves on the verge of bankruptcy. A last minute salvage mission delivers more than they bargained for when Jak's old enemy shows up and steals their haul out from under them. When it is revealed the cargo is more important than any of them realized, Jak decides, against his better judgment, that a retrieval is necessary. His pursuit leads him right past his enemy and into the hands of the most feared pirate in the galaxy.

In the spirit of space operas of old, comes an action packed novel following the exploits of the best low quality pirate in the galaxy - Jak Phoenix.

Matt Williams is a Canadian independent author from Welland, Ontario. He is the creator of the Jak Phoenix space adventure series, spawning two full-length novels and a short story with several more books planned for the series.

Growing up, Matt’s main love was the television and movies of the 80’s and 90’s, like Star Wars, Star Trek, Back to the Future, Indiana Jones and countless other TV shows and films. His love of unbridled adventure spills into his novels, where the focus is letting both the reader and the characters have fun together, sharing in the dangerous dilemmas and daring escapes before kicking back for a cold drink.

When he's not writing or working, Matt likes to try to save time for hiking, reading, playing guitar and spending time with his wonderful wife.

Matt is always available to speak about his work. You can find him on Twitter (@mattwilliams79) on Facebook (www.facebook.com/mattdwilliamsauthor) and on his website at www.mattdwilliamsonline.com. Drop by anytime.

Review
Hannes Birnbacher reviewed on June 1, 2016
(no rating)
Okay, another one anti-hero space pilot. I loved reading it. Dragons, gangsters, at the end the hero saves the world. It's no literature of any kind, but I enjoyed every page!
Two stars for "worth reading, I had fun".

Canadian author Matt D. Williams has produced a witty, entertaining, and action-packed space adventure with his novel Jak Phoenix. The main character by the same name is a free-wheeling space captain with a clunky old ship, the Tempest, held together by salvaged out-of-date parts. Jak, whose piloting skills range from brilliant to lunatic, makes excessive demands on his beloved craft all the time while his one-person crew consisting of Baxter works diligently to cobble together software that keeps the ship's systems running. Hobbled by bad luck and poor planning, Jak makes a sporadic and mostly inadequate income salvaging materials and accepting what transit work comes along. He thinks he's going to finally make a good score when he seeks to claim the Balarian Tablets that are valuable ancient relics lost on a desert planet.

Of course the salvage mission goes horribly awry, mostly because of a dragon, but especially because Jak's old associate and now rival Murdock wants the treasure too.

As the story progresses, recovering the powerful Balarian Tablets becomes central to the plot. A beautiful Balarian woman named Cyan wants to restore the tablets to her homeworld, where their power will sustain the world's ecology. She teams up with Jak and Baxter in a round about sort of way and they pursue Murdock across the Azore's Crown Galaxy. Murdock, despite his wicked disregard for all life, proves to be the least of Jak's problems. Murdock actually means to sell the tablets to the dreaded Captain Cartrite who has been building a mini empire in the galactic fringes. Cartrite is prolonging his life with technology, building an army of advanced and mostly disposable soldiers, and planning to take over the rest of the galaxy and reshape its citizens according to his warped vision of perfection. Tapping into the Balarian Tablets promises to be Cartrite's ticket to supreme power.

Jak of course becomes pivotal in stopping Cartrite's madness, and the stakes of the novel keep going up. There are space battles, traps set in nebulas, escapes from terrifying laboratories, blaster fights in close quarters, and sneaking around in maintenance shafts. The novel Jak Phoenix unabashedly follows every formula and cliché popularized by the sci fi genre. There are overheated engines, remotely-detonated explosives, hacking into defense systems, self-destructing ships, and all of these things were perfectly acceptable and wonderful to me. I love sci fi adventure and the motifs of the genre were lovingly executed by the author.

But the real charm of this novel is its humor. The wit of Williams is artfully low key, and reading Jak Phoenix made me chuckle quite a bit. I enjoyed picking up the novel because I knew it would make me smile and laugh. The novel is full of delightful scenes like this:

"The Tempest's computer had a female voice, although it was not Jak's first selection from the three settings programmed into the operating system. Jak's nonconformist nature subconsciously forced him to insist on an alternate choice, due to the fact that so many pilots and captains chose a female voice for their ships. He had tried the other options. The supplied monotone, generic computer voice, scared the hell out of him and the sophisticated male voice made him uncomfortable. He quickly realized why so many people went with the female setting."

I happily recommend Jak Phoenix to readers who enjoy solid plotting, fun characters, and adventure. The action is plentiful and Jak is a hero easy to root for, and he needs you to root for him. He's daring and good-hearted, but definitely not an overachiever. Throughout his death-defying adventures, most everything goes wrong except his pants falling down. Matt Williams' writing is crisp, clear, and flows from scene to scene effortlessly. He's a writer who has definitely spent more time with Han Solo than the average wookie, but he channels his inspirations in an admirable fashion.

A book that didn't seem to have been carefully plotted before it was written. The hero's escapes were unbelievable. It was more like a comic book than an SF novel. I love space opera but when compared to David Drake, William Dietz, Jack Campbell and lots of other authors whose work I would give a five, I have to give this one a 2

This was actually a really fun read. It's exactly what the author says. A fun old fashioned space adventure. Tons of action, and great characters with really good funny dialog. Looking forward to a sequel!

You have subscribed to alerts for Matt D. Williams.

You have been added to Matt D. Williams's favorite list.

You can also sign-up to receive email notifications whenever Matt D. Williams releases a new book.