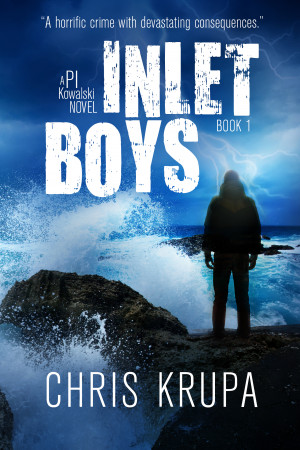 Clues point him in many directions, including an ex-bikie ice trafficker, two masked figures in a warehouse, and even the victim's fiancée, who may have wanted Matt's cousin out of her way.

Now, Matt has unwittingly exposed those he loves to a ruthless black-racketeering syndicate, and he must track a killer before they take out his family.

On his own and up against heavy odds, he exposes a horrific crime with devastating consequences, which will affect the town forever.
~~~
EVOLVED PUBLISHING PRESENTS the first thrilling installment in the "PI Kowalski" series, featuring intriguing crime mysteries set in Australia, written with great authenticity by Aussie author Chris Krupa. [Crime, Murder Mystery, Suspense Thriller - DRM-Free]

I’m a freelance writer and filmmaker, born in 1975 in The Gong, who now lives in Bathurst, New South Wales, Australia with my wife and two sons.

I used to make my own mystery books in the fourth grade by typing them out on an old Olivetti, and I drew my first five-fingered human being when I was four years old.

In 2004, I pitched a comic series to Image Comics, and I contributed cartoons and designed a cover for the Litmus Journal of Melbourne in 2007.

I worked with the Victims of Crime department in Sydney, rubbing shoulders with ex-cons and stand over men, and sought restitution for their victims.

In 2014, I founded a production company, Glitchfilms, alongside my producing partner. In 2015, I wrote and directed an independent horror film, The Lights, which was released in selected cinemas. I self-published the tie-in, behind-the-scenes eBook, Dark Light: How to Get Your Horror Film into Cinemas.

I write every day and try to put some of myself into my writing. My passion is crime fiction, and my favourite authors include Karin Slaughter and Michael Robotham. I also love graphic novels by Neil Gaiman and Grant Morrison.

About the Series: PI Kowalski

You have subscribed to alerts for Chris Krupa.

You have been added to Chris Krupa's favorite list.

You can also sign-up to receive email notifications whenever Chris Krupa releases a new book.