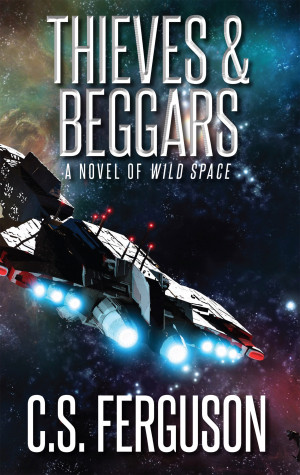 By C. S. Ferguson
The once-infamous Crimson Star pirates have failed. They lost their ship to a band of mercenaries, lost their doctor to the Inquisition, and are now reliant on the good will of the ruthless Borjigin crime family for safety. But the Borjigins could be a blessing in disguise … if they and the pirates can survive the tightening grip of the merciless and calculating Inquisition. More
After the loss of Tamora, the last three Crimson Star pirates are even more desperate to find their hijacked starship and escape the Heracles system. The newly arrived Inquisition is mercilessly crushing crime at every level, and the pirates can feel the icy grip of the law tightening around their necks.
Tybalt’s degenerative condition has accelerated in the absence of Tamora's treatments. With his health deteriorating rapidly, he is desperate to escape the system and find a treatment.
Staff, still hoping to reconstitute the old pirate fleet, enters into a pact with the Borjigins that will change the way the pirates do business.
Nicodemus, frustrated that his undercover assignment was bungled by the Inquisition, sets a plan in motion to end the pirates permanently.
Tamora finds her captors, the Inquisitors, are more interested in recruiting her than imprisoning her. And they seem to be the powerful and capable instructors that she has been seeking for years.
Tesso, having utterly failed to save his home system from the iron heel of the Inquisition, finds himself at an inauspicious end to his career. And it's a failure that he won't be able to forget.

"C. S. Ferguson used to be an adventurer. He traveled half a million miles through 55 countries on every continent, circling the globe nine times. Then he had this epic fight vs. a crazy boss monster that was basically a vampiric half-dragon 14th level ranger/7th level assassin. He tried to solo it, which was a big mistake, because that boss was a total badass. Yeah. It didn’t end well. So, after he weaned himself off the pain killers, Ferguson retired from that and looked for something less dangerous. He settled in Seattle, where everyone is an aspiring game designer, so he claimed the same in an effort to fit in. Except, people believed him.

His 14 games are in 68 countries. That means people actually buy them, which is pretty cool because now he can afford the high-end ramen. The mail lady and grocery store checkout girl both know him by name, so that’s two diehard fans. And his mom gets his name right half the time, so that’s like two and a half. That’s more girls than would talk to him in middle school, so his life is improving."

You have subscribed to alerts for C. S. Ferguson.

You have been added to C. S. Ferguson's favorite list.

You can also sign-up to receive email notifications whenever C. S. Ferguson releases a new book.