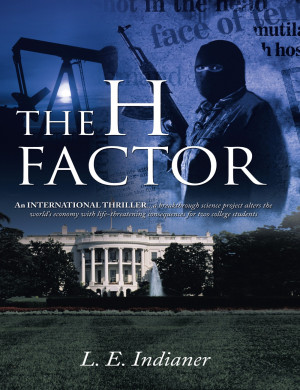 By L. E. Indianer
A freakish natural disaster depletes more than half of the oil supply of the United States. It's not long before OPEC hikes the price of oil, threatening the economic survival of the U.S. economy. Facing deadly foreign and domestic terrorist attacks, the new American president struggles to save a nation on the verge of collapse, and relies on the “H Factor,” the invention of two college students. More
Marc Garrett and Gerri Miller meet in the first semester of their freshman year at Georgia Tech. Both major in Chemical and Biomolecular Engineering. They become romantically involved by the second semester and partner for a three-year undergraduate thesis. Their ambitious project involves the design of the “H Factor,” a device which will separate hydrogen from water, convert it into energy, and could eliminate the need for fossil fuels. Their goals are three-fold—improve the environment and reduce global warming, eliminate the United States’ and its ally’s dependence on foreign oil, and stop the revenues that the oil produces to fund terrorism around the world.
When the H Factor passes its tests on the proving grounds of Universal Motors, Marc and Gerri face unforeseen dangers. Desperate to obtain the technology and unable to block production of the new hydrogen converter, Iranian government officials set in motion plans to forcibly seize it and its invertors. The Israeli Mossad gets wind of this and passes it on to the CIA, who in turn alerts Gerri and Marc. Faced with a deadly confrontation in the midst of global turmoil, the students are determined to survive. Their actions and decisions drive rapidly to a startling conclusion.
Available ebook formats: epub mobi pdf lrf pdb txt html
First 20% Sample: epub mobi (Kindle) lrf more Online Reader
pdb
Price: $5.50 USD
Buy Add to Library Give as a Gift
How gifting works
Create Widget
Tags: espionage terrorist engineering us government triller opec oil crisis young inventors israeli mossad president united states
About L. E. Indianer

L. E. INDIANER: Author of the successful novel "A BRIDGE TO ELNE: Novel of a French Family's Struggle against the Nazi Occupation," Indianer grew up in Miami Beach, Florida. He attended the University of Alabama and Southern College of Optometry. Before opening his practice in Daytona Beach, Florida, he served as a U. S. Air Force Bio-Medical Services Officer for three years. A long time lecturer on eye-related subjects, he has also lectured on the Soviet Union and International Terrorism. As an avid golfer, skier and tennis player for many years, he has traveled world-wide with his family and friends enjoying his other hobby, photography. He has written two plays, ƩAMMY and A BRIDGE TO ELNE, on which his first novel is based. He and his wife, Helaine, have two daughters and seven grandchildren. 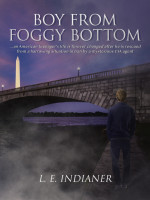 Reviews of The H Factor by L. E. Indianer

You have subscribed to alerts for L. E. Indianer.

You have been added to L. E. Indianer's favorite list.

You can also sign-up to receive email notifications whenever L. E. Indianer releases a new book.