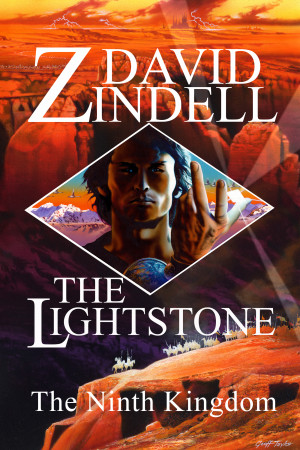 The Lightstone - Part One: The Ninth Kingdom (Book One of the Ea Cycle)

Ea, a world settled in eons past by the Star People, has fallen into moral decay. Now a champion has been born who will lead the world back to greatness, by means of a spiritual–and adventurous–quest into the lands of Morjin, into the heart of darkness, for Ea’s Grail: the Lightstone. More
From the author of Neverness comes a powerful epic fantasy series. The Ea Cycle is as rich as Tolkien and as magical as the Arthurian myths.

The world of Ea is an ancient world settled in eons past by the Star People. However, their ancestors floundered in their purpose to create a great stellar civilisation on the new planet: they fell into moral decay.

Now a champion has been born who will lead them back to greatness, by means of a spiritual – and adventurous – quest for Ea’s Grail: the Lightstone.

His name is Valashu Elahad, and he is destined to become King. Blessed (or cursed?) with an empathy for all living things, he will lead his people into the lands of Morjin, into the heart of darkness, wielding a magical sword called Alkadadur, there to recover the mythical Lightstone and return in triumph with his prize.

Reviews of The Lightstone - Part One: The Ninth Kingdom (Book One of the Ea Cycle) by David Zindell

You have subscribed to alerts for David Zindell.