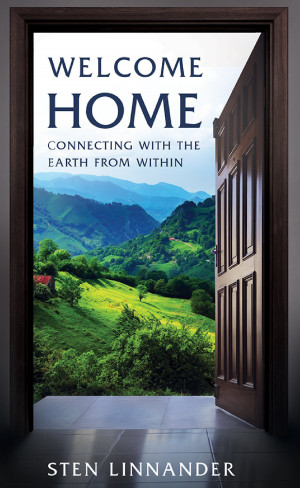 Welcome Home: Connecting with the Earth from within

By Sten Linnander
It may seem absurd to you: The Earth speaking? The geophysics graduate Sten Linnander couldn’t believe it either. But even if it was unexplainable, what he “heard” sounded genuine and authentic. In this second book, he poses questions – his own and those of others - to the Earth. Can it be the “Earth” who answers? Read the book and determine for yourself.

I was born on July 4th, 1950 outside of Stockholm, Sweden, to a father who was an internationally active judge and legal advisor to the governments of various developing countries and a mother who became an early activist against the practices of female circumcision in Africa and elsewhere.

At the age of six, I traveled with my family to Kabul, Afghanistan, where I spent my first 2 ½ school years in an international school. After returning briefly to Sweden, we spent 3 ½ years in Kathmandu, Nepal, where I continued my schooling, first at a Nepalese Jesuit school, and then at the American Lincoln School of Kathmandu. This early exposure to different cultures made a great impression on me, and ever since I have seen myself more as a citizen of the Earth than of any specific country.

I spent two years working at the Swedish State Institute for Building Research as author of manuals for architectural computer programs, and co-authored a book about Swedish building research in Third World countries.

In 1976 I left Sweden, and have not lived there since.

Feeling unfulfilled with my life in Sweden, and fairly "stuck" personally, I went to visit a radical community in Austria, which had developed a communitarian lifestyle of their own, with an emphasis on artistic expression, daily spontaneous theater, and art. I ended up staying there for 3 years, and left because I disagreed with many of the structures that had been created there.

I then spent 3 years in the United States, patenting and marketing new technologies and inventions in the areas of oil recycling, cleaning of oily waste water, and cleaning of air and gas.

After that, in 1983, I joined an experimental social model in Germany. My main work there was as the head of a "free university", organizing visits by internationally acknowledged researchers and innovators from the social, scientific, and spiritual areas.

In 1990 I and two friends of mine founded the German non-profit organization "Aktion Perestroika", which I headed for 3 years. We organized aid programs and the transfer of technological know-how, and carried out a number of projects in the areas of ecology, medicine, and city administration in the former Soviet Union.

From 1994 to 2002 I spent most of my time in Arizona in the United States. There, I studied Native American shamanism and established and ran the non-profit research organization Future Link Foundation, Inc.

Since then I have been living in Germany and have been working to prepare the project for the worldwide marketing and distribution of live images of the Earth.

During the last 15 years I have also been working as a freelance translator for translation agencies in Switzerland and Germany, as well as for other companies, institutions and individuals.

I am married and live in Frankfurt, Germany.

You have subscribed to alerts for Sten Linnander.

You have been added to Sten Linnander's favorite list.

You can also sign-up to receive email notifications whenever Sten Linnander releases a new book.