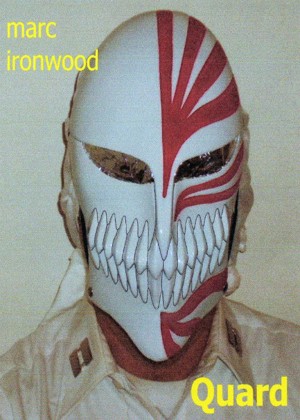 By Marc Ironwood
Rated 3.00/5 based on 1 reviews
This is a book of Inspirational poetry about a Christian king. The captain of the guards is the son of a Christian king. He wrote the poems anonymously, on the basis of a book of order. Quard wears a mask in public; no one knows he is the king's son.
Quard is a series of e-books.
Download: epub mobi (Kindle) pdf more Online Reader
rtf lrf pdb txt
Price: Free! USD
Add to Library
Create Widget
Tags: poetry inspirational
About Marc Ironwood

Marc Ironwood has been writing solo and
collaborative poems and short fictional stories
since 1978.In 2002 Marc joined forces with his
wife Krissy Deanne to form the writing duo
known as "Krissy N Marc".
Marc has been known for his obscure writings
and for his unusual theatrical front project
covers.
In March of 2008 Marc did his most shocking
event when shaved his head, and the photos
of his bald head appeared on his website and
his solo project entitled "Alien".

In January 2014 Krissy N Marc experienced a
fire at the home and office, fortunately no one
was hurt. The pieces were replaced in a new
location and business carried on as normal.

Marc annouced mid June 2015 that he has
officially retired from writing ebooks and projects.
Marc stated that the reason was due to his
personal life, although he added that he was
pleased with the decision and thanked God for
allowing him to write for 37 years !

You have subscribed to alerts for Marc Ironwood.

You have been added to Marc Ironwood's favorite list.

You can also sign-up to receive email notifications whenever Marc Ironwood releases a new book.