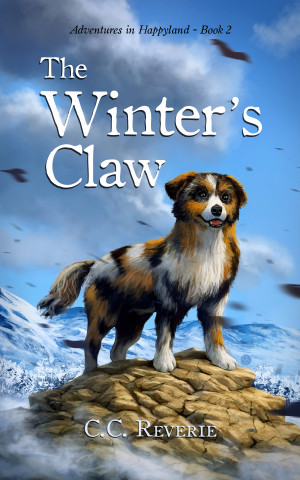 By C.C. Reverie
For a stray dog, the world feels like an enormous fighting ring where survival is the only useful skill. As he tries to find his lost master, Pepper must hide from fellow strays determined to drive him out of the city and withstand the heavy winter storm that has cut him off food and water. The Winter’s Claws, follows Pepper in his new adventure through the neighborhoods of Happyland. More
The Winter’s Claw, the second instalment of the series Adventures in Happyland, is a survival story about a reluctant hero and the quest of his lifetime.
Forced to flee the city of Happyland, Pepper, a stray dog in search for his lost master, takes shelter in a tool shed situated in Tucker’s family backyard. His hopes to remain undetected are ruined when one of the Tucker kids stumbles upon him in and takes him inside, as a pet.
For a few days, Pepper enjoys a sweet and safe life. He is groomed, fed and loved. But when he sees his mugshot grinning from some lost-dog posters glued to the lamp poles in the street, he smells trouble. His biggest enemies, the mutts of Tank’s gang, would track him down for sure.
It didn’t even cross his mind that he may also be found by his master. And before long, a man rings the doorbell at Tucker’s, presenting himself as the dog’s owner. Pepper should be happy, but is he?
The Winter’s Claw follows Pepper and his friends - Puppanela, a female dog, Wizzy, a wizard mouse, and Hank, a newspaper journalist, - on a journey from heaven to hell, in which the party takes on a fight against human malice.
Available ebook formats: epub mobi pdf lrf pdb txt html
First 20% Sample: epub mobi (Kindle) lrf more Online Reader
pdb
Price: $1.99 USD
Buy Add to Library Give as a Gift
How gifting works
Create Widget
Tags: young adult pepper fantasy adventure book ccreverie adventures in happyland funny adventure dog middle grade dog adventure story sniff it 2 the winters claw wizard mouse
About C.C. Reverie

C.C. Reverie is an independent author who lives in St. Paul, Minnesota. She had started her career as a journalist almost twenty years ago, at first reporting for a small newspaper then moving on to a television station where she had worked as a news journalist, and later as a freelance documentarian.

As an author, C.C. Reverie had written and published few poems in her native language and two short stories in English. The place where the sun never dies and Days are never quite alike were published in Novelty - Story and Perspective magazine, February 2012 issue and signed as Goldenstar Kytori.

Her first novel, Sniff it!, a “smart kids’ book”, had been recently published in digital edition.

Historian by education, C.C. Reverie has earn a B.A. with a major in European History from a prestigious institution in Bucharest.

C.C. Reverie was born in communist Romania and had lived part of her life trying to fight the regime. Ultimately, she had moved to U.S., but she had kept her Romanian citizenship. She is now working on her next book, a sequel to Sniff it!

About the Series: Adventures in Happyland 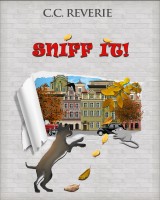 Pepper is a stray dog who wants nothing else in this world than to find his long time lost master. But things do not always go as planned and Pepper finds himself caught in someone else’s story, trying to help his friend in danger while struggling to stay alive. Trapped between a gang of bad dogs and a party of corrupted humans, Pepper must find a smooth way out while remaining loyal to his allays.

Written for smart kids of all ages, Adventures in Happyland is a series of stories that fallow the faith of a dog and a mouse, whose paths are intersecting with the ones of a young couple, thus changing their destiny forever.

Also in Series: Adventures in Happyland

Reviews of The Winter's Claw by C.C. Reverie

You have subscribed to alerts for C.C. Reverie.

You have been added to C.C. Reverie's favorite list.

You can also sign-up to receive email notifications whenever C.C. Reverie releases a new book.