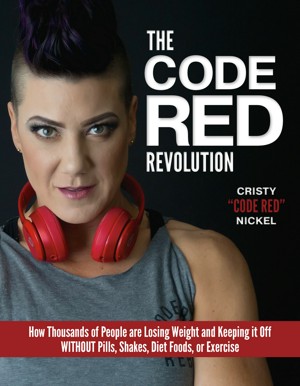 By Cristy "Code Red" Nickel
Former #2 boxer in the world and celebrity nutritionist Cristy "Code Red" Nickel presents the solution to obesity in The Code Red Revolution. Not only does she teach readers why they've become overweight, she gives them the tools to lose that extra weight; without pills, shakes, patches, or even exercise. More
What if you could lose as much weight as you wanted WITHOUT spending money on pills, powders, weird diet food, or even exercise? Would you want to know more?
Former professional boxer and celebrity nutritionist, Cristy "Code Red" Nickel shows you how maintaining a healthy weight doesn’t have to be complicated. In fact, when you keep it simple and just follow a few basic rules, the weight comes off naturally (even if you have health challenges). It doesn't matter how old you are. It doesn't matter what your genetics are. It doesn't matter how long you've been overweight or what other methods you've tried. You can do this!

The Code Red Revolution is all about taking your life back by eating real food and giving your body what it needs—water, high-quality nutrition, and plenty of sleep.

Most weight-loss books and plans teach you one magical way to lose weight, but they don’t take into account just how wonderfully individual we all are. This book shows you how to integrate the simple-but-effective program recommendations into your daily life.

Stay-at-home parent cooking for fussy eaters? We gotcha covered.
Travel for work and are rarely home to cook? You can absolutely learn how to eat in restaurants and still lose weight.
Allergic to certain types of foods? We can work with that.
Couch potato? No problem!
Vegetarian (or a really-hate-vegetables-tarian)? You can do this.
Thousands of people around the world have already lost 10, 50, even 100 pounds with the Code Red lifestyle. And they’ve kept the weight off for years. This book is full of detailed success stories from people of all ages and all walks of life.

Isn’t it time you learned the secret to lasting weight loss?

Make this time the last time you have to lose weight.

Get this book and take your life back once and for all!

She created a nutrition program that enables people to lose 10% of their body weight per month without shakes, diet pills, diet foods, or exercise.
Cristy has been in the health and fitness industry since 1994. While studying Exercise Science at the University of Memphis, Cristy competed in 3 NPC Figure competitions, placing in the top 5 at each show.

In 2003, Cristy became a federally licensed professional boxer and fought in 15 professional fights all over the world. She was named one of
the “Top 3 Most Dangerous Females on the Planet” by Ring Magazine, which landed her a coaching role on MTV’s hit series “MADE.”
The success of that show propelled her to New York City to train top celebrities, business tycoons, models and professional athletes. In 2008, Cristy was awarded “New York’s Best Trainer,” by Allure Magazine.

Cristy retired from boxing in 2010 and launched the Code Red Lifestyle. Her custom-written nutrition programs have helped thousands of people all over the world lose weight and take their lives back without shakes, diet pills, diet foods, or exercise.
Cristy lives in Boise, Idaho with her husband, Miles, and dog, Annabelle. She has a passion for running, mountain biking, snowboarding, yoga, and nutrition.
She is working to bring the Code Red Lifestyle to policemen, firemen, and EMS workers via Code Red Protocol, and to put an end to childhood obesity with Code Red Kids.
Her wildly popular 10 Pound Takedown Challenges have introduced thousands to the Code Red Lifestyle, and helped them lose weight and heal everything from aches and pains to fibromyalgia and Type II diabetes.

She is also excited to share the Code Red Lifestyle with our nation’s churches via Code Red Arise.
Cristy is a keynote speaker who has presented at a wide array of venues, from college campuses to elementary schools. She has made numerous radio and TV appearances, and her loyal clients, nicknamed Code Red Rebels, stand in line for hours to meet Cristy during her book tour stops.
In 2018 Cristy introduced Code Red Certified Coaches to help her bring the Code Red Lifestyle to more people all over the world!

You have subscribed to alerts for Cristy &quot;Code Red&quot; Nickel.

You have been added to Cristy &quot;Code Red&quot; Nickel's favorite list.