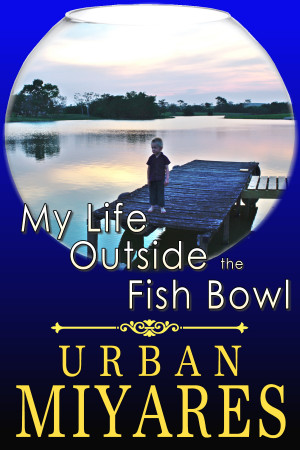 My Life Outside the Fish Bowl

In candid prose, Miyares sheds light on his over-achieving personality, his obsession to recognize the meaning of love, and anguish to find his purpose in life.

"My Life Outside the Fish Bowl” is a compulsive, inspirational memoir, laced with vivid (and some not as vivid) memories which include recognizing how your past defines you. It is also a powerful story about never quitting, and forging your own path to reach goals considered insurmountable by others.
Available ebook formats: epub mobi pdf lrf pdb txt html
First 30% Sample: epub mobi (Kindle) lrf more Online Reader
pdb
Price: $4.99 USD
Buy Add to Library Give as a Gift
How gifting works
Create Widget
Tags: inspiration veteran entrepreneur alcoholic father adult blindness perseverance against all odds urban miyares
About Urban Miyares

Always driven to write, from his military service and early business career to writing newspaper columns, now retired, his destiny to be an author has arrived.

His first book, “My Life Outside the Fish Bowl,” is to be followed shortly by “Hap: The Last American Hero,” a romantic novel, and then by “The Pebble Garden,” a mystery-crime novel series.

Urban Miyares lives in San Diego, California, with his wife, their son, and grandchildren.

Reviews of My Life Outside the Fish Bowl by Urban Miyares

Urban why did you change the introduction page to read “non-fiction” when you had previously admitted that it was largely “fiction”? You had even apologized to any 6/31st vets (me for one) who you had upset with your fabricated stories of your platoon being wiped out and of you being found alive in a body bag. Many of us had accepted your apology. That was obviously a mistake.

I don't understand all of the negative reviews. I enjoyed this book even though I knew some of it was probably embellished to make it read better. Heck, if you read my life without a few extra here and there, it would be boring. This man did so much even though he was injured and disabled after Vietnam. This book really inspired me. If a man who is disabled with blindness and diabetes can do all that he did, what excuses do I have? I just want to say again that I enjoyed reading this. It makes me sad others didn't enjoy it as well.

(reviewed the day of purchase)
Delta75 reviewed on April 16, 2019
(no rating)
Wow! For some unknown reason, Urban has decided to speak some truth in the Author Note of his newly published ebook "My Life Outside the Fishbowl". You will find the following in the ebook being sold by Barnes and Noble.

"In regards to my Vietnam service, I have only vague remembrances of what others said while I was sick. Later for entertainment purposes only, the embellishing of several tales was in no way meant to be disrespectful to my fellow soldiers with whom I served. This specifically includes the "body bag" and the "only survivor of a platoon" story..... To any Vietnam veterans this may have offended, I deeply apologize."

(reviewed 14 days after purchase)
Delta75 reviewed on April 6, 2019
(no rating)
This book is a joke. Urban promised us an autobiography and what we got was a book that the publisher admits, in their introduction to the book, is “part fiction and part nonfiction”.

(reviewed 5 days after purchase)
Delta75 reviewed on April 3, 2019
(no rating)
Reference Urban's claim about being told in 1968 that he had been found alive in a body bag.

Urban you keep saying that “someone” at the Saigon hospital told you in August 1968 that you had been found alive in a body bag; however, you admitted to me in the following email string that you didn’t arrive at the body bag story until 2003 when you heard about a medic who had found someone alive in a body bag. So it would have been impossible for someone in 1968 to have told you about a body bag story that you didn’t even arrive at until 2003. See the email string below:

Urban.....So no one specifically told you that you had been placed in a body bag? You just knew that 2 days were missing. Then later you heard about Brian Leet finding a man alive in a body bag at Lai Khe and assumed that it was you....since the soldier was shipped to Saigon and you had just arrived at Saigon...thus explaining the missing 2 days?

Urban Miyares
To
Jerry White
03/19/14 at 12:58 PM
Somewhat...Brian and I didn't connect until 2003, after he read a Holiday letter (Dec. 2002) by the DAV with my story. We talked for a while on the phone (a number of times) trying to compare notes, of what I//we remembered and somehow the time it all happened blended. But neither of us have ever received a confirmation.

I've told Brian that I can't imagine how I got to his medical unit, as Brian was with the 1st Infantry.

You will find my inputs below. First a couple of corrections for Urban: (1) NCOC training was at Ft Benning not Ft Polk. You did your OJT at Polk (check your military records...we did), (2) Doubt you did an air combat assault in the Delta in a Chinook. It was probably a Huey. I did a hundred or more...all in Huey’s...not one in a Chinook. Additional note: Per Urban’s military records, again, which we have, Urban spent less than a month in Vietnam. Per his own inputs he spent the first 2 weeks on sick call and only 2 days in the field. He spent the remaining week in a hospital in Saigon before being shipped out of Vietnam.

FYI: My review inputs below were provided to the men of the 6/31st via our 6/31st Facebook page.

Well guys, Urban still got his body bag into the story which we know is BS. He also mentioned his lack of knowledge as to what happened to his platoon...based on the 6/31st KIA records it's clear.....nothing happened to them..not one man lost during the 2 days that Urban says that he was in the field (8-11/8-12). He also got his medic buddy Brian Leets mentioned as the medic who "might" have saved him from that body bag. Again, we know that there was no way in hell that a man from the 6/31st would have been shipped out of IV Corp all the way to III Corp where Brian was stationed. In addition there is no way that a man in a diabetic coma could have survived 2 days in a body bag in the Delta.

If he had left out the body bag, the medic and the possibility that his platoon lost alot/all of its men.....it wouldn't have been too bad a tale. I do wonder, however, how he could have experienced so much in the one week or less that he wasn't either on sick call or in the Saigon hospital.

Another point to remember. Urban doesn’t remember the name of a single person with whom he served in Vietnam and not a single man on our present 6/31st roster (2,000+ men) remembers Urban.

On the last couple of pages of the book can be found the following statement from Urban: "After email communications with Jerry, and a few others from the 9th Infantry Division sending uncomplimentary emails about my pretending to be in the same outfit as they were, and my statement of (being) found alive (in a body bag) being false, the pride of serving with the 9th Infantry Division and in Vietnam was gone. Not a battle I wanted or was able to fight."

You have subscribed to Smashwords Alerts new release notifications for Urban Miyares.

You have been added to Urban Miyares's favorite list.

You can also sign-up to receive email notifications whenever Urban Miyares releases a new book.