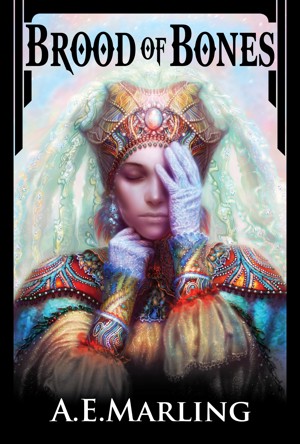 By A.E. Marling
Rated 4.33/5 based on 3 reviews
An enchantress suffering from pathological sleepiness learns everyone in her city is pregnant except for her, and she must find the sorcerer who is drawing power from the unnatural pregnancies before they come to term and he gains overwhelming magic. More
Cursed with endless drowsiness, Enchantress Hiresha sleeps more than she lives. Since she never has had a chance to raise a family, she sometimes feels like every woman is pregnant except for her. This time, she is right.

From virgin to grandmother, all the women in her city have conceived. One unexpected pregnancy is a drama; fifty thousand is citywide hysteria.

A lurking sorcerer drains power from the unnatural pregnancies, and Hiresha must track him by his magic. Unfortunately, her cultured education in enchantment ill equips her to understand his spellcraft, which is decidedly less than proper. The only person uncivilized enough to help is the Lord of the Feast, a dangerous yet charming illusionist. Associating with him may imperil Hiresha’s city, yet refusing his help will allow the sorcerer to leech godlike power from the mass births.
~~~
Dark Fantasy
Download: epub mobi (Kindle) pdf more Online Reader
lrf pdb
Price: Free! USD
Add to Library
Create Widget
Tags: fantasy magic dark fantasy high fantasy female protagonist strong female
About A.E. Marling

Fantasy writer, activist, human being, & law-abiding citizen. In that order.

Reviews of Brood of Bones by A.E. Marling

Our heroine is the Elder Enchantress, and has won 27 gowns in academia, showing her prowess. For some reason, in a land of banyan trees and protectors named Gautam, she wears all of them at the same time, making movement tiring and complex. Which is the least of her problems, since she keeps falling asleep all the time. In this world, magic is done only when asleep, so her magic is fine, if only she can keep awake long enough to find out what the problem is she needs to fix. The great city of Morimound, from where she hails, has suddenly been afflicted with mysterious pregnancies. Every woman 12 or older is pregnant. Is it godly or an evil magic? Whom can she trust? Our heroine turns out not to be snobbish, incompetent, sociopathic or stupid, but a shy nerdy young woman you begin to love more and more as the book moves on through horrors and petty people to a rivetting end. Read this book! I look forward to more.

I wasn't sure, going in, how well the book's premise would work for me. It sounded incredibly bizarre. Marling managed to make it work, although I had to take breaks several times. The way people treated the women and girls was almost uniformly awful, the fetuses themselves were little abominations, and the villain was vile.

The things I turned out to dislike the most about this book were Marling's writing and Hiresha's drowsiness. I haven't been able to put into words what it is about Marling's writing that doesn't work for me, but Hiresha's drowsiness had a tendency to make her waking world feel surreal. She had trouble staying focused, and her clothing didn't help – in addition to wearing six dresses, she had 21 more trailing behind her, plus a golden hump strapped to her back. She moved with the aid of a cane, Janny, her maid, and Deepmand, her bodyguard. Even then, she was always one slight misstep away from landing on her face or one moment away from sweating herself into dehydration. The hump and gowns did turn out to be useful, but I'm not sure they were worth the 200+ pages they spent hampering her movements.

This book was at its best when Hiresha was asleep or in the presence of the Lord of the Feast. Sleep allowed Hiresha to enter her dream laboratory, where she could replay her memories and analyze them in the most minute detail, noting microexpressions and other things that her sluggish waking mind missed. Sleep also gave Hiresha access to her magic, which could heal terrible wounds, regrow limbs, and enchant objects and clothing. I thought that the benefits and drawbacks of her magic were well-balanced and nicely done.

Being with the Lord of the Feast had similar effects on Hiresha. Something about him (maybe instinctual self-preservation?) flooded Hiresha's system with adrenaline, which allowed her to observe the world at the same level as when she was asleep. Hiresha's conversations with him were usually a lot of fun. Unfortunately, he didn't show up until about halfway through the book. Also, he brought with him a discomfiting possible romantic subplot. He was way too obviously Hiresha's future tragic and dangerous vampire boyfriend (well, not a vampire in the traditional sense – he could create and feed upon fear – but close).

I haven't decided yet whether I'm going to continue reading this series.

This is a totally unique story that grabs hold and does not let go. I read the last page and hungered for more. This must read!

You have subscribed to alerts for A.E. Marling.

You have been added to A.E. Marling's favorite list.

You can also sign-up to receive email notifications whenever A.E. Marling releases a new book.