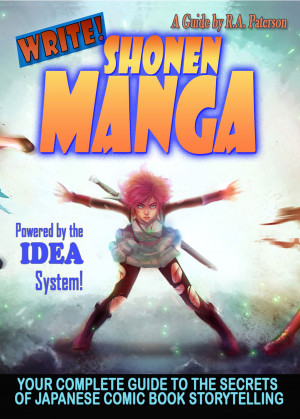 By Robyn Paterson
Write! Shonen Manga is the guide you need to understanding how the Japanese bring their stories to life and created a global manga revolution. Whether you’re a complete beginner, or a master of words, this book will help you understand and break down why your favorite manga work, and how you can do the same. Utilizing the IDEA story system, this book will help you easily put together your manga! More
Are you a comic artist who wants to write, but doesn’t know how?

Are you a writer who wants to write stories like the ones in your favorite manga?

Are you an experienced storyteller looking to up your game by trying something new?

Write! Shonen Manga is the guide you need to understanding how the Japanese bring their stories to life and created a global manga revolution. Whether you’re a complete beginner, or a master of words, this book will help you understand and break down why your favorite manga work the way they do, and how you can do the same. Utilizing the IDEA story system, this book will help you easily put together stories in ways you didn’t know were possible, bring your characters and settings to life, and write the stories that will touch your audience.

Naruto has sold over 220 million copies in 35 countries worldwide. Dragonball is a $5 Billion-dollar global franchise. One Piece has sold more than 430 million copies globally, and is the best-selling manga in history. And, this book takes apart the story formulas that their creators used to build their manga and anime empires so you can make your stories even better and reach your own global audience.

Along the way, you’ll also learn why the Japanese approach to storytelling is so different from the American one, and how this difference in perspective makes the stories what they are. Also, you’ll learn to how take control of your story’s central themes, characters, plot and setting, and how to combine them to create fresh takes on old stories- and make new stories that are as unique as you are.

So, what are you waiting for? Hoist your flag and set sail on your own manga creator voyage with Write! Shonen Manga as your guide. You never know where your imagination and skills will carry you, and what friends and adventures await!
You only need to take that first step into a new world.

When Rob was kid, his toys weren’t toys so much as actors and characters that he used to bring his dreams to life. Pens and paperclips became space fleets, Lego bricks became buildings for toy dinosaurs to smash through, and his action figures were a travelling cast of actors who played many roles on the stage of Rob’s imagination. Not so much toys, they were a way to tell stories of high adventure, clever deeds, and the struggles of noble heroes against impossible odds.

Not much has changed.

Through High School and his University degrees, Rob was a Game-Master for Role Playing Games like CHAMPIONS and GURPS, which let him share his stories and imagination with other people. He was fortunate enough to meet some gifted storytellers, and he learned from them the art of conveying a good story while weaving in some action and drama in real time. His love of adventure works like Dumas’s Three Musketeers and Forester’s Horatio Hornblower, along with his lifelong fascination for Asian cultures, led him to spend several years living and travelling in Japan, Taiwan and South Korea, and there too he absorbed history and met fascinating people while having a few real-life adventures of his own.

During this time, he also came across a uniquely Chinese genre of fiction called Wuxia, and fell passionately in love with it. Wuxia, which most Western people are familiar with from movies like Crouching Tiger, Hidden Dragon and HERO, is the Chinese historical adventure genre of martial arts, swordplay, and romance. In many ways, Wuxia was perfect for Rob because of its spiritual connection with Dumas’ work and almost everything Rob loved about storytelling. But, Wuxia was first and foremost a literary genre, and thanks to the work of kind translators, Rob devoured the works of writers like Jin Yong, Gu Long and Liang Yusheng.

Also, while in Taiwan, he decided to take up Podcasting, and what started out as a spoken word Podcast called Kung Fu Action Theatre, where Rob shared translations of Chinese Wuxia stories, turned into a full-blown Audio Drama podcast that had Rob working with actors from across the globe to bring his own stories to life. From the superheroines ofTeam Iron Angel, to the far reaches of Space Opera in Twin Stars, and Old China with his flagship Wuxia series The Adventures of Little Gou, KFAT let Rob share his love of high spirited adventure with the world. In the end, he produced over 47 original audio dramas, almost all of which he wrote, directed, edited and distributed through KFAT to tens of thousands of listeners each month.

Now, Rob is back to playing with toys again, but this time the stories are playing out in the imaginations of readers throughout the world. With the release of his first novel Ascension: A Novel of the Twin Stars in 2013, Rob began a new journey as a writer. With a goal of bringing humor, adventure and wonder to readers, Rob uses his love of history and literature, alongside his experiences as a teacher and traveler, to bring readers stories of the fantastic with a uniquely Asian flair. Come join him on his adventures, for there’s never a dull moment, and you might just share a few tears and laughs along the way.

Reviews of Write! Shonen Manga: Your Complete Guide to the Secrets of Japanese Comic Book Storytelling by Robyn Paterson

You have subscribed to alerts for Robyn Paterson.

You have been added to Robyn Paterson's favorite list.

You can also sign-up to receive email notifications whenever Robyn Paterson releases a new book.