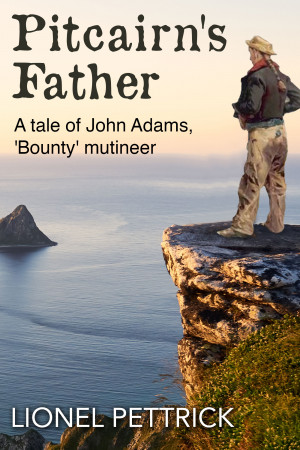 By Lionel Pettrick
A tale of John Adams, 'Bounty' mutineer who redeemed his early criminal life by leading a community to peace and harmony. More
John Adams tells his tale of thieving and murder in 18th Century London, and life as a sailor on the North Sea. After being implicated in a disastrous attempt at smuggling and another murder he joins the 'Bounty. There he recounts the voyage to Tahiti, the mutiny, and subsequent difficult years on Pitcairn before his transformation as the leader of a peaceful and unique community.
Available ebook formats: epub mobi pdf lrf pdb txt html
First 20% Sample: epub mobi (Kindle) lrf more Online Reader
pdb
Price: $3.99 USD
Buy Add to Library Give as a Gift
How gifting works
Create Widget
Tags: 18th century john adams hms bounty fletcher christian captain bligh pitcairn
About Lionel Pettrick

Follow
I am British, born in North Wales in 1944, grew up mainly in Sheffield, and also worked for an engineering company in that city for twenty-two years. I later moved to the south of England, spending twenty years in the Immigration Service. Since retirement I have lived in Thailand.

Only since I retired have I turned to authorship, motivated at the beginning of 2018 by the gift of a handsome desk diary with a large number of blank pages which it seemed a pity to waste. Thus my first offering, "Dillflower" was born, a collection of jottings, rants, reminiscences and descriptions of some aspects of life in Thailand. This is available as an ebook via one well-know retailer.

Many years of sailing on the English Channel and elsewhere instilled in me an unbounded admiration for the men (and women) of former centuries who took to the world's oceans in wooden sailing ships. A reading of the Journal of William Bligh led me to a great interest in the story of the mutiny on the 'Bounty', and it struck me that it would be fun to try and write a story about one of the protagonists, a common seaman who signed on in a false name and about whose early life virtually nothing is known. His real name was John Adams; he ended up as the sole survivor of the mutineers who went to Pitcairn with Fletcher Christian and was celebrated by Victorian England as the leader of a pious community loyal to the British Crown. My "tale of a 'Bounty' mutineer" is therefore called "Pitcairn's Father". Really it is a simple morality tale, good triumphing over evil.

In late 2019 an academic got himself a newspaper headline by saying that 'Robinson Crusoe', arguably the first novel in the English language, should be re-written with a woman as the castaway, presenting a more acceptable character to modern audiences. Without wanting to detract from Defoe's classic, I was intrigued by the notion, and taking elements from the original I created 'Frieda', a young woman seeking adventure and independence in the 17th Century. Though I didn't set out to do so, I found myself writing about issues often in the news nowadays, such as slavery and domestic abuse.

Having delved quite a bit into olden times, I find myself asking whether people in the 17th or 18th Centuries were fundamentally less moral, more wicked, than we are today? I don't think so, but the vast majority of people then had a much tougher existence than most today, in Western countries at least. Given the World Wars of the 20th Century and the dire state of much of the world in 2021, I wouldn't say we have much to condemn those in former times for what they did.

Perhaps there's another book in all that somewhere...

You have subscribed to alerts for Lionel Pettrick.

You have been added to Lionel Pettrick's favorite list.

You can also sign-up to receive email notifications whenever Lionel Pettrick releases a new book.