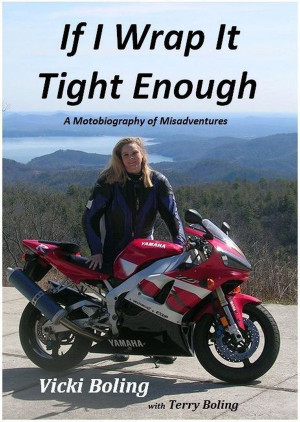 If I Wrap It Tight Enough

Learn of her struggles to heal both physically and mentally but never giving up on her desire to ride. Meeting a fellow motorcyclist and soon married, her husband helps Vicki ride again. Due to the extent of the injuries, her motorcycle had to be modified. The physical limitations from the accident forced her to change her riding style, but she was riding again.

Déjà vu would strike a few short years later when involved in another accident. This time her right knee and left shoulder and arm were injured. Vowing to ride once again, this recovery would have new challenges. Healing and rehabilitation was longer than expected, and an unforeseen challenge was the development of spinal pain. This pain was unbearable and affected walking, standing, and sitting.

Terry was born in Cedar Lake, Indiana, and moved to South Carolina at the age of 12 with his family in 1981.

In the early days, Terry was, for the most part, never interested in English or writing. Not until Terry attended Clemson University and majored in Mechanical Engineering did he discover he did like and enjoy writing. His interest in writing started with English 101, continued through English 102, and he even used English courses as electives toward the ME degree he never did earn. He surprised his adviser at Clemson when Terry asked about minoring in English while in an engineering major. The school did not offer such a thing and, to his adviser, it sounded ridiculous.

Terry got involved in writing again, several years later, when he wrote a few articles for the US Desmo club magazine, “Desmo Leanings,” and would later be named the Technical Editor for the publication.

Terry is a stereotypical “workaholic” as he is always working on many things at the same time. At the time this book was written, he was working his regular 40+ hour-per-week job, teaching a class and taking a class at a technical college, advertising and showing a rental house while seeking a new tenant, maintaining their 31-acre horse farm, and so many other things. Some of the most enjoyable things Terry does are having 3Ds with Audrey. [Note - “3D” is short for Daddy-Daughter-Dinner].

You have subscribed to alerts for Terry Boling.

You have been added to Terry Boling's favorite list.

You can also sign-up to receive email notifications whenever Terry Boling releases a new book.