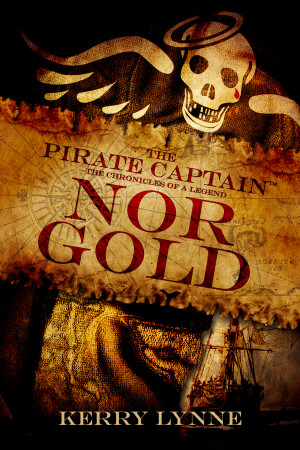 The Pirate Captain, Nor Gold

As Nathan sails off, Cate tries to come to terms with her new situation. Practicality tells her Thomas is not an altogether poor future: he’s amiable, generous, and most of all, willing… but her heart is still with Nathan.

Nathan, in the meantime, has but two quests: to get Cate back and to claim his revenge against Lord Breaston Creswicke and the Royal West Indies Mercantile Company. In that process, he discovers there is no outrunning his past and that there are consequences for every action.

"Kerry Lynne was a history major in college and went into teaching for a few years. Then she wound up in the decorative painting world, where she traveled, taught and published for over 35 years and as luck would have it her hand stopped working. So she went back to what she knew: writing, history and sailing."

The Pirate Captain series is not a romance but there is a "intense" love story between the Captain and a Jacobite widow. It is not a story that ends in smiles and happily ever afters but there are deep emotions shared and sacrifices witnessed. It is not a Treasure Island “wannbe” nor will Blackbeard, Mary Reed or Jack Rackam make an appearance but there are Captain Blackthorne, Cate MacKenzie, Thomas, Hattie, and Breston Creswicke.

About the Series: The Pirate Captain, The Chronicles of a Legend

The Pirate Captain, The Chronicles of a Legend, book series is a historical fiction, action/adventure saga with a twisted love story and answers the question of what would one man do to "Keep his Treasure"!

Also in Series: The Pirate Captain, The Chronicles of a Legend

You have subscribed to alerts for Kerry Lynne.

You have been added to Kerry Lynne's favorite list.

You can also sign-up to receive email notifications whenever Kerry Lynne releases a new book.