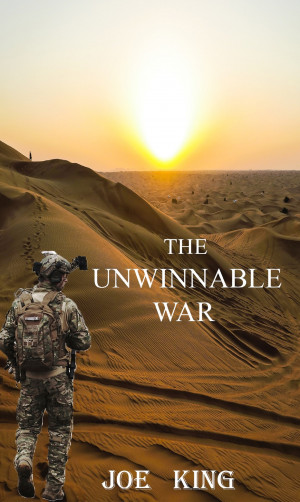 By Joe King
Dèjì is drafted to Northeastern Nigeria to fight terrorists. He is the only surviving child of his widowed mother. His family has an extensive history of service to fatherland as his late father was a veteran of the Nigerian Civil War. He had lost his older brother who was also a soldier to the terrorist few years earlier and the mother had pleaded to quit the military. Will he make it out alive? More
This is a story of a young soldier drafted to fight against hardened terrorists in Northeastern Nigeria. His name is Dèjì. He is the second of two children. His older brother had died fighting against terrorists years earlier. His late father was also a veteran of the Nigerian Civil War before he died of a cardiac arrest. In short, his family had an excellent record of service to fatherland. He hid his deployment from his mother because she had been pleading with him to quit the military training school (Nigerian Defence Academy) since the death of his older brother, Tósìn.
When he got to Maiduguri, he was given familiarization training and survival training to complement the one he had had in the school. During a sentry duty, he came face to face with a suicide bomber. The suicide bomber was a very young girl. He had an opportunity to neutralize the little girl before she got to him and his unit but he found it extremely difficult. Luckily, the suicide bomber tripped and fell detonating the bomb prematurely. He and his colleague survived, albeit with minor injuries. He participated in the rescue of two other suicide bombers.
On another patrol deep in Sambisa forest, his unit had a fierce encounter with the terrorists. During the firefight, the terrorist managed to penetrate their defense through heavy use of Vehicle Borne Improvised Explosives. He survived but he was cut off from his units. He miraculously survive a little boy that was sent to “finish” him when he laid unconscious after a bullet hit his helmet hard. He took the boy as a hostage and escapes the grasp of the terrorists. He eventually freed the little boy after giving him a good lecture, and set to escape the harsh unforgiving semi-desert. He demined several IEDs littered across the forest. His water supply was low and because of the hot humid air, he had to drink constantly so he eventually ran out of water. The weather condition of the environment make the lack of water have a profound impact on him. He became disoriented and drifted in and out of consciousness.
Eventually, he collapsed but luckily he was saved from certain death by a mother and daughter gathering wood in the bushes. Though, the mother and daughter lived under the terrorists, they still rescued him. They took him into their home and nursed him back to health. He regained consciousness and was glad he had finally survived the desert. He thought he was in a village and had been rescued by some villagers. He later learnt that he was actually staying in the terrorist camp, though not as a captive as the terrorists weren’t even aware of this presence.
He learnt his savior’s name was Hajia Atikah. She was also a kidnapped victim of the terrorist who murdered her husband and turned her son into one of them. They also planned on marrying out her eight years old daughter to one of the fighters once she turned nine, a fact she tried to hide from her daughter. Dèjì came close to dying when Nigerian Air Force fighter jets bombarded the camp killing dozens of terrorists and the people living with them.
Dèjì offered to help Hajia Atikah’s family to escape. Hajia Atikah accepted but chose to stay behind so as not to quickly raise suspicion. They hatched a plan and perfected it. They almost made it out but was caught by a friend of Hajia Atikah’s son. This friend realized they were trying to escape and decided to join them.
Later in the morning, the camp commandant discovered the facts about the escape incident. He figured they couldn’t have gone far since they were travelling on foot. He set out to bring them back and killed them as a punishment for deserting the group. Before he left however, he had Hajia Atikah killed for aiding and abetting desertion. And also, for fornicating, a charge he made up. He eventually caught up with the escape but was killed by Dèjì and his travelers. They weren’t aware of Hajia Atikah’s death as they eventually made it to civilization.
Available ebook formats: epub
Price: $0.99 USD
Buy Add to Library Give as a Gift
How gifting works
Create Widget
Tags: love terrorism family war conflict secrets survival

Reviews of The Unwinnable War by Joe King

You have subscribed to alerts for Joe King.

You have been added to Joe King's favorite list.

You can also sign-up to receive email notifications whenever Joe King releases a new book.