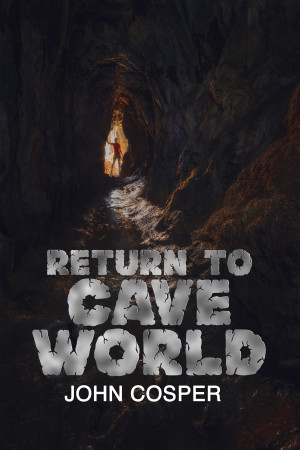 By John Cosper
The teenage creator of the Cave World creates more problems for his best friend when he accidentally writes her into his alternate universe. More
Donny's adventures on Arrax continue in this exciting sequel. Jennifer had long admired her friend Donny's devotion to writing the next great science fiction saga. She even found his stories about having visited that world amusing. But Donny took things a step too far when he wrote her into his latest tale.

Now, inexplicably, Jennifer finds herself in Donny’s world on the run from a maniacal dictator who sincerely believes this teenage nobody will one day kill him! Driven by a desire to set things right, Donny follows Jennifer back to the Cave World, assembling a team of old heroes and new in the hopes of saving his friend. But in the end, Jennifer must make the choice herself to lay down and quit - or stand up and become her own hero.

Filled with humor, action, and heart, Return to Cave World is an exciting sequel that bridges the Cave World universe with some of John Cosper’s other creations, including Space Kat. It’s a welcome return to a world where any planet in the galaxy is within walking distance. You just have to find the right cave.
Available ebook formats: epub mobi pdf lrf pdb txt html
Price: $2.99 USD
Buy Add to Library Give as a Gift
How gifting works
Create Widget
Tags: young adult science fiction aliens teen space travel teleportation narnia
About John Cosper

John's writing career began in 1994 when he took on the role of drama leader for his church's youth program. Later that year, he founded Righteous Insanity, a drama publishing company providing skits, plays, and writing services to churches around the world. In 2011 John became a kids ministry curriculum writer for Minister's Label, creating skits, games, lessons, and more for childrens-ministry-deals.com.

As time went on, John expanded his creative endeavors to film, web media, and his first love, science fiction. His credits include two feature films, multiple TV and web programs, and dozens of short films including the award winners "The Telemarketer," "Tolerance," and "Bots."

"Sci-fi is a great vehicle for exploring matters of faith." says the writer whose influences include Douglas Adams, George Lucas, Joss Whedon, Philip K. Dick, C.S. Lewis, and Isaac Asimov. "It also allows you limitless opportunities for creativity and humor."

When he's not writing, you're most likely to find him spending time with his wife and kids.

Reviews of Return to Cave World by John Cosper

You have subscribed to Smashwords Alerts new release notifications for John Cosper.