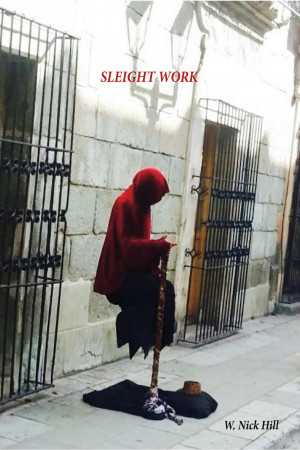 By W. Nick Hill
Like a busker with a sheaf of pages to hand out, the voice in the screens of this ebook will talk about magic in these times, give the insider view of manuals and manualography, give pointers on how to have tea, what to do when you meet an Emperor, and how to survive. Among other things, like subjunctives, the history of style, buckteeth smiling in the photo booth. More
Poet W. Nick Hill claims that Sleight Work makes nothing happen; sleight but serious, he adds. What's more, it's up-to-date, handmade, and biodegradable, so it's the most sustainable nonfiction in its niche. Readers shouldn't look for pretty or gritty in these brief digital passages of sportive pixels. Instead some straight talking right during the bait and switch, wry counters to fake news, and valuable experiences with parts of language, all should help spread the wish you keep your eye on the pea even though you suspect it's not where you think under those shells.

Like a busker with a sheaf of pages to hand out, the voice in the pages of this book will tell about magic in these times, give the insider view of manuals, how to have tea, what to do when you meet an Emperor, and how to survive. Among other things, little-known truths about the subjunctive, the history of style, tips on caring for the roots of gratitude.
Available ebook formats: epub mobi pdf lrf pdb txt html
First 20% Sample: epub mobi (Kindle) lrf more Online Reader
pdb
Price: $4.95 USD
Buy Add to Library Give as a Gift
How gifting works
Create Widget
Tags: gifting social witness metapoetry handy humor survivalist sonnets
About W. Nick Hill

Walter Nickerson Hill, born in Chicago, raised in São Paulo, Brazil, Ph.D. from Iowa, Emeritus professor of Spanish at Fairfield University, now lives in Port Townsend, Washington, where he was the farmers’ market manager for two years. He has traveled to and in Mexico, principally to Oaxaca, for many years. He has translated several titles from Spanish, such as the testimonial novel, Biography of a Runaway Slave, by Miguel Barnet, which was republished by Northwestern University Press in 2016. Hill’s versions of the award-winning poetry of Mexican Jorge Fernández Granados appeared in various journals like eXchange, In/translation, and as the chapbook, Constructed on Coincidence, in the 30th Anniversary issue of the Mid-American Review (2010).

Hill’s poetry has come out in various journals: World Literature Today, minnesota review, Dogwood, Sow’s Ear Poetry Review, and in Spanish / English: The Americas Review, Bilingual Review, Ventana abierta, and others. His Mundane Rites / Ritos mundanos was a finalist in the Sow’s Ear Chapbook Contest in 1997.

Sleight Work, Hill’s third full book of poems, was published under a Creative Commons copyright, as part of the effort to make the World Wide Web accessible for everyone. It is available at his website (www.wnickhill.net) and as an Ebook on Smashwords (smashwords.com) and other distributors of digital works, like Scribbd (scribbd.com).

Hill lives on the Olympic Peninsula in Washington state with his spouse, Barbara.

You have subscribed to alerts for W. Nick Hill.

You have been added to W. Nick Hill's favorite list.

You can also sign-up to receive email notifications whenever W. Nick Hill releases a new book.