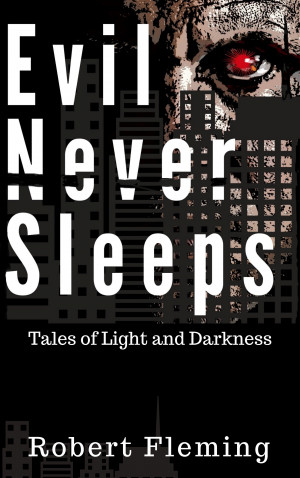 “Reading Robert Fleming’s Evil Never Sleeps is, yes, a pleasure: his stories bite, his characters live and breathe, his language perfectly flows, there are bottomless depths, his words linger in thoughts and dreams long after the pages have been turned…but there is more than pleasure in reading these wonderfully written stories. Being able to immerse yourself in Evil Never Sleeps is an honor: to be able to encounter Fleming’s art, his music, his magic, is a gift you will thank yourself, and most of all, the author, for this powerful experience.”
—M. Christian, author of many books and stories

“Fleming, a writer at his peak, leads his readers down the rabbit hole of human nature. He exposes human frailty, strengths, and loneliness with a depth that allows you to see yourself in the characters. When you emerge on the other side, you are forever changed. Masterfully written.”
—Dean Jean-Pierre, author of The Killer in Me

“A compelling collection of unsettling tales, evil as a butterfly knife to the throat.”
—Brandon Massey, author of Dark Corner

“Fleming’s stories are worlds unto themselves, each is a grand carnival of the troubling and absurd; the beautiful and the profane blend to form a whole that speaks to the discord and disillusion, hope and triumphs of the Black experience.”
—Zander Vyne, author of many books and stories

Robert Fleming, a freelance journalist and reviewer, formerly worked as an award-winning reporter for the New York Daily News, earning several honors including a New York Press Club award and a Revson Fellowship. His articles have appeared in publications including Essence, Black Enterprise, U.S. News & World Report, Omni, The Washington Post, Publishers Weekly, and The New York Times. His non-fiction books include Rescuing A Neighborhood: The Bedford-Stuyvesant Volunteer Ambulance Corps, The Success of Caroline Jones, Inc., The Wisdom of the Elders, The African American Writer’s Handbook, Free Jazz, Rasta, Babylon, Jamming: The Music and Culture of Roots Reggae. His fiction titles include Fever in The Blood, Havoc After Dark, Gift of Faith, Gift of Truth, and Gift of Revelation. He edited the popular anthologies After Hours and Intimacy. He has taught journalism, literacy, and film writing at Columbia University, Marist College, City University of New York, and The New School.

You have subscribed to alerts for Robert Fleming.

You have been added to Robert Fleming's favorite list.

You can also sign-up to receive email notifications whenever Robert Fleming releases a new book.