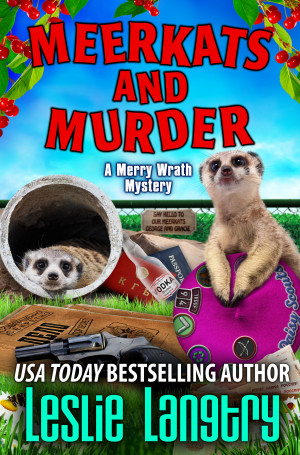 By Leslie Langtry
When a masked gunman breaks into agent turned Girl Scout Troop leader, Merry Wrath's home, things aren't looking good. But they look even worse when that same gunman later turns up murdered! From a cosplaying teenaged zookeeper to a possible plot by the Russians, Merry struggles to keep her troop together and catch a killer...before the killer catches Merry first! More
From USA Today bestselling author Leslie Langtry comes a former CIA agent turned Girl Scout Troop leader, and a murder that will keep you guessing until the end!

Just as Merry Wrath’s former career as a CIA agent seems to be fading into a distant memory, the agent turned Girl Scout troop leader discovers that her beloved little suburban ranch house may not be what it seems. When a masked gunman breaks in to demand the return of "Nye," she fears that she may not have been the first spy to live there. What…or who is "Nye?"

And when Merry trips over the dead body of that same gunman later at the zoo, she realizes that her favorite king vulture and his mouthy scarlet macaw friend may be witnesses to a murder. Suddenly this becomes much more personal, and her list of suspects grows from a cosplaying teenaged demigod zookeeper, to a possible plot by the Russians... which may even include Merry's old arch-nemesis.

Things aren’t going well for her Girl Scout troop either, as a new addition causes trouble, and the girls begin to turn against each other—sparking way more than just preteen angst. From a dangerous close encounter with a mythical red wolf, to a jovial, geriatric group of Russian expats who brew their own mind-bending vodka, Merry Wrath worries that if she doesn’t find the killer soon, this case may be her last.

What critics are saying about Leslie Langtry's books:

"I laughed so hard I cried on multiple occasions while reading MARSHMALLOW S'MORE MURDER! Girl Scouts, the CIA, and the Yakuza... what could possibly go wrong?"
~ Fresh Fiction

Leslie Langtry is the USA Today bestselling author of the Greatest Hits Mysteries, The Adulterer's Unofficial Guide to Family Vacations, and several books she hasn't finished yet, because she's very lazy. Leslie loves puppies and cake (but she will not share her cake with puppies) and lives with her family and assorted animals in the Midwest.

Reviews of Meerkats and Murder by Leslie Langtry

You have subscribed to Smashwords Alerts new release notifications for Leslie Langtry.

You have been added to Leslie Langtry's favorite list.

You can also sign-up to receive email notifications whenever Leslie Langtry releases a new book.