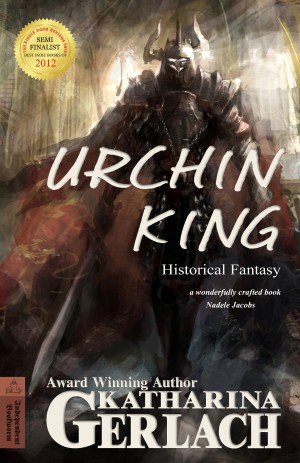 By Katharina Gerlach
Rated 4.50/5 based on 4 reviews
Street-urchin Paul learns that his miserable existence keeps him safe from an ancient law that decrees the killing of all second born twins. He agrees to stand in for his twin brother, the mentally challenged Crown Prince, but finds that his skill of going unnoticed is now a liability. Can he defeat a vengeful sorcerer and a soul-devouring ghost without getting his friends and family killed? More
For fourteen years, street-urchin Paul's miserable existence has kept him safe from an ancient law that sentences all second-born twins to death. When he learns he is the younger twin of the mentally handicapped Crown Prince who's in danger of being killed for his disability, he agrees to play the role of the miraculously healed royal heir. Paul struggles to learn how to act like a born ruler. He knows if he is discovered, he will be executed like all second-born twins.

Just when Paul fears that his cover is blown, a vengeful sorcerer set on destroying the royal family kidnaps Paul's father, the king. Paul must put his life on the line to save him and the people he cares about. But even if he wins, he still faces the death sentence of the ancient law unless he gains his father's love.
Available ebook formats: epub mobi pdf lrf pdb html
First 25% Sample: epub mobi (Kindle) lrf more Online Reader
pdb
Price: $3.99 USD
Buy Add to Library Give as a Gift
How gifting works
Create Widget
Tags: magic twins medieval medieval fantasy twins brother medieval adventure magic and adventure europe history
About Katharina Gerlach

Katharina Gerlach was born in Germany in 1968. She and her three younger brothers grew up in the middle of a forest in the heart of the Luneburgian Heather. After romping through the forest with imagination as her guide, the tomboy learned to read and disappeared into magical adventures, past times, or eerie fairytale woods.

She didn’t stop at reading. During her training as a landscape gardener, she wrote her first novel, a manuscript full of a beginner’s mistakes. Fortunately, she found books on Creative Writing and soon her stories improved. For a while, reality interfered with her writing but after finishing a degree in forestry and a PhD in Science she returned to her vocation. She likes to write Fantasy, Science Fiction and Historical Novels for all age groups.

At present, she is writing at her next project in a small house near Hildesheim, Germany, where she lives with her husband, her children and her dog.

Book Trailer
this is a book trailer for "Urchin King" done by the author herself (including her voice, and believe me, she's got a funny accent for a German) 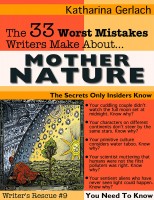 In a world where being the younger twin of a noble means being put to death, Paul shouldn't be alive. But his twin Rupert is mentally handicapped and his royal parents need a miracle. Thrust suddenly into court life from his life on the streets, Paul must successfully pose as the miraculously healed Crown Prince or face his belated execution. Complications soon arise when his father, King Albert is captured by a vengeful sorcerer.

Urchin King is a fantasy story loosely based on The Prince and the Pauper, with many twists and turns of a magical nature. I found the story line interesting and intriguing and it was unique and complex enough not to sound like a simple rehashing of an old tale. Gerlach obviously has a fine sense of story and plot, and the novel was exciting, filled with many adventures that drive the story on.

That said, I'm torn between giving this book a three or a four star rating due to the inadequacies of the writing itself. I felt that many of the chapters were short and could have been further expanded upon. As it was, there was a feeling, not quite of urgency, but more of being rushed through the story to the end instead of being allowed to linger in the words and on the page.

In the mythical medieval kingdom of Xawia, two newborn princes were separated at birth. But the law of the land, death to the second born of twins, was subverted and the younger twin hidden away, like the baby Moses. Years later he is found and now he must save his new-found, but damaged, brother by secretly replacing him as crown prince. You can't help but remember The Prince and the Pauper by Mark Twain when you read this book, but this story offers its own charming uniqueness in plot and characters, and I found myself wholly absorbed. The Urchin King is a wonderfully crafted book in which the prose and all elements of structure very quickly become invisible and the story seems to tell itself.

Do you enjoy young adult fantasy? Do you like a well-written adventure story with magic? Then you need to try this book.

Paul is a beggar who lives with other street kids in a land where when twins are born, the second twin is killed at birth. To his amazement, Paul finds out that he is actually a second twin, spared from death by being raised away from his heritage. When Paul replaces his highborn disabled twin, his adventures begin in earnest. Will he be able to save the kingdom?

I was delighted as I was surprised to see this foray into historical fantasy by Ms. Gerlach, previously known to me for her middle-grade work in more modern settings. I find Urchin King to be a rollicking, fast-paced adventure that moves easily and quickly between castle and forest, city and wilderness following the delightfully harrowing adventures of its hero Paul.

This lad is thrust into an unfair situation and under a heavy burden as he is taken away from ruffians to live among royalty. Readers of classic works may think they can see where things are going, but any similarity to "that story" ends fast, and Paul finds that he must access the talents of both his lives to survive and succeed, only to face the seemingly insoluble dilemma of his oracle and an awful law that hangs over the kingdom.

As Ms. Gerlach deftly moves the story ahead towards its climax, we find that Paul, who began the tale too young yet to be a man, discovers it's fast becoming too late to remain a child. If you enjoy the maturation of worthy young characters, a detailed world in which the kingdoms and their religion, culture and society easily fit, and stories where fate exists but not doom- I recommend Urchin King to your attention as the most recent of Katharina Gerlach's successes.

You have subscribed to alerts for Katharina Gerlach.

You have been added to Katharina Gerlach's favorite list.

You can also sign-up to receive email notifications whenever Katharina Gerlach releases a new book.