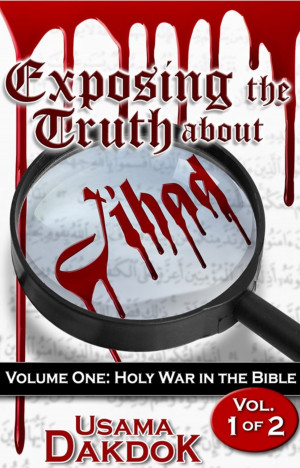 Exposing the Truth About Jihad Vol. 1: Holy War in the Bible

By Usama Dakdok
An important overview and an insightful examination of the details surrounding death and killing in both the Bible and the Qur’an. More
Is war ever “holy”? Is it possible for there to be justified bloodshed according to God’s judgment? It is undeniable that the Bible records many instances of the Lord bringing death and judgment through various “holy” wars. What is the difference (if any) between these battles and the violent history of Islam over the past fourteen centuries?

In this first of a two-volume series, Usama Dakdok provides both an important overview and an insightful examination of the details surrounding death and killing in both the Bible (Volume One) and the Qur’an (Volume Two). The reader will see the pattern of justified killing in the Bible (judgment due to sin) versus the arbitrary and unjustified murders carried out in Islam as commanded by Allah.
Available ebook formats: epub mobi pdf lrf pdb txt html
First 10% Sample: epub mobi (Kindle) lrf more Online Reader
pdb
Price: $9.99 USD
Buy Add to Library Give as a Gift
How gifting works
Create Widget
Tags: jihad holy war bible study aid christianity and islam bible aids jihad and war biblical wars holy war in islam islamic war
About Usama Dakdok

Usama Dakdok, an Egypt-born Christian, first learned about Islam while in government schools in his home country (as does every other student in a Muslim country). He furthered his university degree education at the High Institute of Social Work, Egypt, which included the study of Sharia (Islamic Law).

Because Arabic is his native language, he discovered upon arriving in America in 1992 that the commonly used English translations of the Qur’an were full of misrepresentations that minimized its violent teachings as revealed in the Arabic text.

Having an expert understanding of Islam, he deeply desired to reach out to Muslims in America with the Gospel of Jesus Christ. So, in 2001, he founded The Straight Way of Grace Ministry which has a two-fold purpose: to equip the Christian church to minister to Muslims, and to warn all Americans about the deceptive methods being used by Muslims to lead so many into the cult of Islam.

For over a decade, Usama has traveled extensively throughout America and Canada sharing the powerful message of “Revealing the Truth about Islam.”

Usama holds a B.A in Theology and a M.A. in Missiology from New Orleans Baptist Theological Seminary.

Reviews of Exposing the Truth About Jihad Vol. 1: Holy War in the Bible by Usama Dakdok

You have subscribed to alerts for Usama Dakdok.

You have been added to Usama Dakdok's favorite list.

You can also sign-up to receive email notifications whenever Usama Dakdok releases a new book.