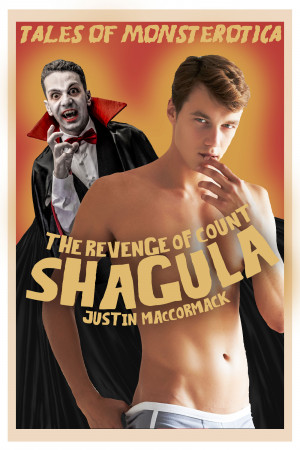 The Revenge of Count Shagula

Jonathan Woodcock has finally returned home – but he is not yet safe as the world’s naughtiest vampire, Count Shagula, pursues him relentlessly, eager for just another nibble. Will Woodcock be able to come out on top once again, or will Shagula have his wicked way with our beloved hero? More
After months of travel, fighting evil groping ghouls and feisty Frankensteins, Jonathan Woodcock has finally returned home! Having escaped from the distant castle of Count Shagula and the vampire’s very naughty sex dungeon, Jonathan is happy to get back to his cozy hamlet in England and perhaps, finally, have a decent cup of tea.

But all is not well back home, and it’s not just brexit that’s causing trouble! Some sinister figure is skulking around the countryside, bothering young men and nibbling on their naughty bits! And this time it isn’t your humble writer – honest! No, it seems that the cock-hungry Count has followed our brave hero home like an eager puppy.

Will our submissive Jonathan finally put his foot down and drive his wooden shaft up the Count’s dark places once and for all?

The Revenge of Count Shagula is a 15,000-word novella.

"Things that go hump in the night" - James Wallis

“Welcome to the crazy, sexy, cool universe of Justin MacCormack. He has taken on some of the great classic horror stories and given them a twist and a turn. His versions are making me laugh, and I find them witty and very entertaining.” – Miss Betty

Justin MacCormack is a pen name for Alison Cybe.

Alison “Cybera” Cybe is an Award nominated author who specializes in fantasy and horror fiction. They are the manager of the gaming website CybesWebsite.com in which they write articles, editorials and reviews. Their first published work, a collection of short psychological horror stories, enjoyed a brief stint on the bestseller charts and was soon joined by many others, and their previous work has been featured in several horror and sci-fi/fantasy publications including Dark Cities and Phantasmagoria.

They work as a freelance writer for companies including tabletop RPG publishers Green Ronin Publishing, and has written extensively on inclusion and positive representation within the gaming community, and has contributed short fiction to multiple gaming publications. Their recent published works includes a series of LGBTQ+ comedy novels “Tales of Monsterotica” published by Deep Desires, along with horror works for Weasel Press and comedy fiction for Thurston Howl Publications.

They were born in Scotland and live in England, and is a co-manager of a large gaming club. Their interests include Celtic mythology, transhumanism, garage kits and pet rats, and they have a degree in Film & Media. Their pronouns are they/it and favorite color is green. They can be contacted via email for any questions or communications concerning this site, freelance writing queries including available rates, and invitations to GM an amazing game of Call of Cthulhu for your group.

About the Series: Tales of Monsterotica

Also in Series: Tales of Monsterotica

You have subscribed to alerts for Justin MacCormack.

You have been added to Justin MacCormack's favorite list.

You can also sign-up to receive email notifications whenever Justin MacCormack releases a new book.