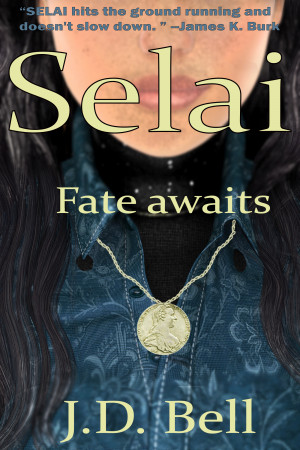 Like his characters, JD Bell is a big persona living in a world that is too small for his personality. An early reader of SF and fantasy, Bell’s stories have captivated many listeners for years – but he rarely wrote them down. The few exceptions are still out there: early sales to The Space Gamer magazine with stories that perfectly linked the Ogre and GEV game universe. These short stories were too good to disappear, and in an era of disposable electrons, his work has resurfaced in reprints from Steve Jackson Games anthologies.

JD’s presence at decades of SF conventions in the Kansas and Oklahoma region is also the stuff of legend. (But as the statute of limitations has not expired on some of those exploits, it is best we do not speak of these finer moments. )

His work is a remembrance of SF and Fantasy as it was, with ringing swords and phasers that are rarely set to stun. His characters are the perfect combination of larger than life skill set coupled with a world-weary point of view, caught up in the action of the moment. With no time to consider the finer points of etiquette, they rarely choose discretion, opting for a full-tilt fight though the outcome may be in doubt.

Add to that their ability to miscalculate the passions involved, and you have a character that is larger than life and extremely competent – sometimes tripped up by matters of heart and emotion.

In other words, a person much like his readers – and the author.

JD lives in Kansas with an adorable wife and with three daughters that take strongly after the cats he raised over the years: Fiercely independent, strong willed, extremely resourceful – and of course, beautiful.

Reviews of Selai by J.D. Bell

You have subscribed to Smashwords Alerts new release notifications for J.D. Bell.

You have been added to J.D. Bell's favorite list.

You can also sign-up to receive email notifications whenever J.D. Bell releases a new book.