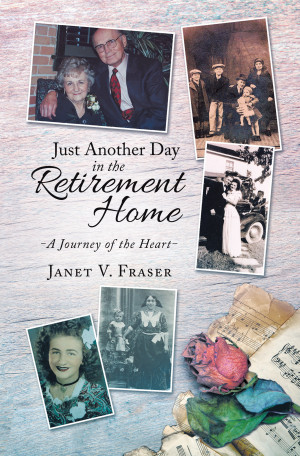 Just Another Day in the Retirement Home: A Journey of the Heart

Janet Fraser is a first-time author with a background in nursing. She earned her RN, Bachelor of Science degree in Nursing as well as a Bachelor of Arts degree in Psychology from McMaster University in Hamilton, Ontario. Since retiring from many years as a Public Health Nurse for the City of Hamilton, she spends much of her time advocating for health services in the community and visiting the elderly with her dog, Katie. Although Janet's work as a Registered Nurse was primarily with children and youth, her experience as a client advocate led her to the role of advocate for her aging parents in the retirement home. This experience—as a daughter, rather than a nurse—inspired Janet to write this memoir.
Janet enjoys an active lifestyle with her husband, Jim. She enjoys hiking, cycling, sailing, skiing, and swimming, and is a passionate organic gardener. Janet is also an advocate for the environment, and hopes to leave a healthier, greener world for her two children, three step-children and eleven grandchildren.
Janet lives with her husband, Jim, and her dog, Katie, in Hamilton, Ontario.

You have subscribed to alerts for Janet Fraser.

You have been added to Janet Fraser's favorite list.

You can also sign-up to receive email notifications whenever Janet Fraser releases a new book.